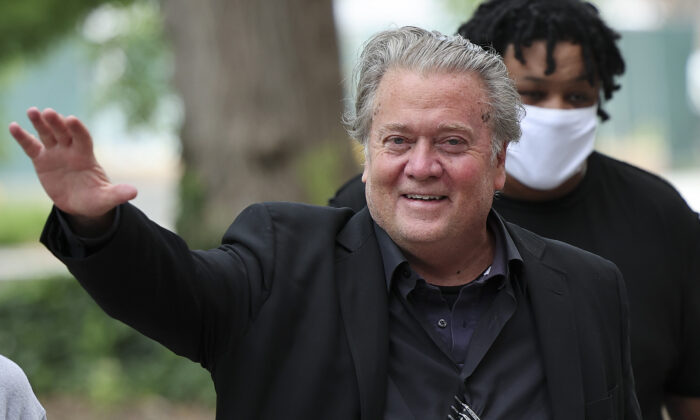 Former White House chief strategist Steve Bannon arrives at the U.S. District Courthouse for his trial for contempt of Congress, in Washington on July 19, 2022. (Win McNamee/Getty Images)
US News

WASHINGTON—Jurors were selected for the contempt of Congress trial for former White House aide Steve Bannon on July 19.

Bannon was charged after refusing to comply with a subpoena from the House of Representatives select committee probing the Jan. 6, 2021, breach of the U.S. Capitol.

A onetime aide to former President Donald Trump, Bannon was charged in late 2021 by a federal grand jury on two counts of contempt of Congress.

If convicted, Bannon faces up to 60 days in jail.

Whittling down the jury pool to 14 took a day and a half, after U.S. District Judge Carl Nichols, a Trump appointee, denied Bannon’s requests to delay the trial.

A jobs training program crew leader, a parks and recreation worker, and a driver for special needs children are among those on the jury.

The jury also includes a senior program associate with the International Republican Institute, a National Aeronautics and Space Administration photographer, an appliance company worker, and a contractor for Test Yourself DC.

Each side gets strikes, or the ability to remove prospective jurors from the pool, during the process.

Prospects struck by prosecutors included a woman who said she needed to care for her grandmother in New Jersey and a former paralegal.

Bannon’s lawyers struck a wallpaper salesman who said he’d never heard of Bannon or the Jan. 6 Capitol breach despite working blocks away from the building, and an assistant to an arts festival director.

Jurors were told the case may go into next week.

Charges of contempt of Congress are unusual, and taking the charges to trial are rare—the last criminal contempt case took place in 1983, according to the Congressional Research Service.

Bannon has maintained that his lack of cooperation stemmed from executive privilege, which provides some shielding for former presidents and their aides. Trump invoked executive privilege after Bannon received a subpoena but told Bannon in a recent letter that if an agreement was reached, he would waive the privilege to let him “testify truthfully and fairly.”

Bannon is among those targeted by the House panel who have offered to testify during televised hearings.

“I think we would have been more productive if we’d been on Capitol Hill, in front of open mics, addressing the nation with exactly all this nonsense, show trial they’ve been putting up on Capitol Hill,” Bannon told reporters outside the courthouse on Monday.

The House panel consists only of Democrats, except for two GOP members picked by House Speaker Nancy Pelosi (D-Calif.). Reps. Liz Cheney (R-Wyo.) and Adam Kinzinger (R-Ill.), the members, are vociferously against Trump. Cheney is embroiled in a tough primary battle while Kinzinger plans on retiring after his current term.

Rep. Bennie Thompson (D-Miss.), its chairman, said in a letter to Bannon’s attorney that he had taken “the inappropriate position that Mr. Bannon will not comply with any request for information or testimony sought by the Select Committee,” adding that Trump’s privilege claim did not provide a legal basis for the refusal to cooperate.

Correction: A previous version of this article inaccurately stated when opening arguments would take place. They took place on Tuesday. The Epoch Times regrets the error.