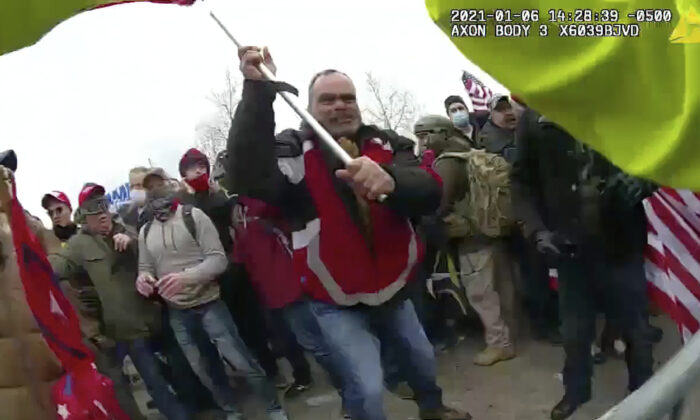 Former New York police officer Thomas Webster was convicted on May 2 on six charges related to the Jan. 6, 2021, breach of the U.S. Capitol.

The most serious charges carry up to 20 years in prison.

Webster is the fourth Jan. 6 defendant to have his or her fate decided by a jury; all four have been convicted on all charges.

By contrast, the defendants who chose bench trials have secured partial or full acquittals.

“We’re disappointed, but we recognized at the beginning that folks here in D.C. were quite traumatized by what transpired on Jan. 6, and I think we saw some of this expressed today,” a lawyer for the defendant told reporters outside federal court in Washington.

Webster, who worked 20 years for the New York Police Department before retiring in 2011, claimed he was acting in self-defense when he hit Noah Rathbun, a Metropolitan Police Department officer, outside the Capitol on Jan. 6.

Webster testified that felt like he was hit with a hammer or a freight train when Rathbun struck him.

“It was painful, and I was seeing stars,” Webster said. “It was a hard hit, and all I wanted to do was defend myself.”

Video footage from Rathbun’s body camera showed he used force against Webster after the New York man pushed a bike rack toward him. Rathbun testified that he was trying to move Webster away from a security perimeter. After Rathbun used force, Webster swung a metal flag pole at him but missed. When Rathbun grabbed the pole, Webster charged and tackled the Washington officer.

Rathbun told the court that he began choking when Webster grabbed his gas mask.

“We had a video that depicted what exactly, what transpired here, including the officer punching Tom at a time when it wasn’t necessary,” James Monroe, Webster’s lawyer, told reporters after the verdict was announced. Because of jurors’ thoughts about the Jan. 6 breach, it was difficult for them “to keep an open mind,” he claimed, adding that an appeal might be lodged.

One juror told a reporter that the jury experienced “no dissension” and “unanimously agreed.” Another said the verdict was “very quick and obvious” and said the self-defense claim wasn’t compelling.

U.S. District Judge Amit Mehta, an Obama appointee, had denied an attempt to shift the trial to another location, ruling that Webster didn’t provide that jurors would be prejudiced against him.

“Don’t let the defendant off the hook for what he did that day,” Kelly said.

Monroe countered that Webster had a right to defend himself against a “bad cop” who was using excessive force.

“Get behind the truth. And I’m talking about the whole truth,” he told jurors.

Webster, who wasn’t accused of entering the Capitol, is scheduled to be sentenced on Sept. 2.

Prosecutors asked for Webster to be detained pending sentencing, but the judge agreed to let him remain free until that hearing. He’ll be monitored with an ankle bracelet. The judge said it was a “close call” whether to jail him immediately but noted that he has complied with current conditions of release and doesn’t have any prior convictions.