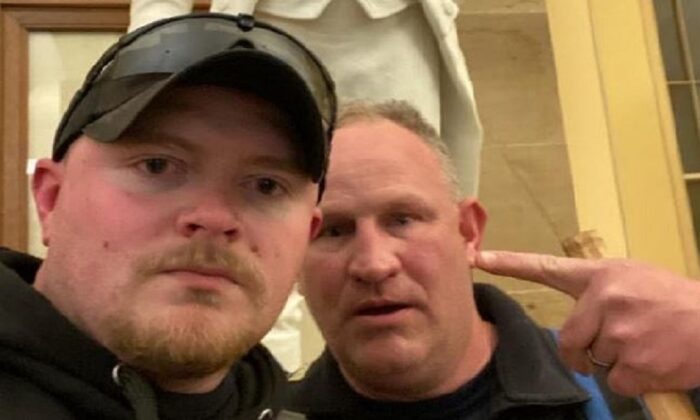 Thomas Robertson and Jacob Fracker pose in the U.S. Capitol on Jan. 6, 2021. (DOJ via The Epoch Times)
US News

A former police officer was convicted on April 11 of six counts relating to his taking part in the Jan. 6, 2021, breach of the U.S. Capitol.

Robertson faces up to 75 years in jail.

“While Mr. Robertson disagrees with the jury’s decision he respects the rule of law. He will appeal the verdict as he submits he never corruptly obstructed or impeded Congress on January 6. Furthermore, while the jury disagreed with his position, he did not use his walking stick as a dangerous weapon on January 6,” Mark Rollins, a lawyer for the defendant, told The Epoch Times in an email.

According to the U.S. Capitol Police, Robertson, a police officer with the Rocky Mountain Police Department in Virginia at the time, entered the Capitol after 2 p.m. on Jan. 6 and made an obscene statement.

When Robertson entered the building on Jan. 6, it “was on lockdown” and his presence inside “was without lawful authority,” according to charging documents.

A grand jury later charged that Robertson “attempted to, and did, corruptly obstruct, influence, and impede” the certification by Congress of the 2020 presidential election’s electoral votes.

The trial of Robertson, who was fired from his job a day after the breach, started on April 5.

Jacob Fracker, who was charged with Robertson, pleaded guilty in March to one count of conspiracy in exchange for several other charges being dropped. He could land up to five years in prison.

Robertson had attempted to get the sole felony with which he was charged dismissed, arguing through his counsel that prosecutors had failed to specify which proceeding he allegedly obstructed and that the joint session of Congress that was in session on Jan. 6 did not constitute an official proceeding, but a ceremonial one.

U.S. District Judge Christopher Cooper, an Obama appointee who oversaw the case, rejected the attempt earlier this year, concluding that the session did meet the requirement of an official proceeding.

Nearly 800 people have been charged in relation to Jan. 6, with approximately 248 entering guilty pleas so far.

Just four have not pleaded guilty and have seen their trials conclude, including Robertson.

Guy Wesley Reffitt, who did not enter the Capitol, was convicted on five counts, including civil disorder, by a jury in March. The two other cases were decided by a judge after the defendants chose bench trials. U.S. District Judge Trevor McFadden, a Trump appointee, fully acquitted Matthew Martin, a former federal contractor, and split a decision on the other man, Cowboys for Trump founder Couy Griffin.