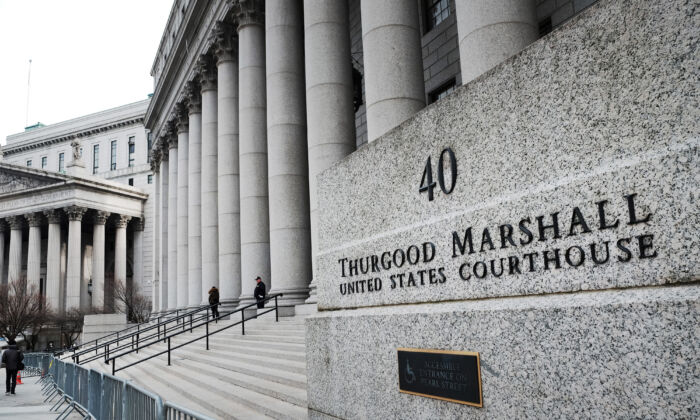 The Thurgood Marshall United States Courthouse is seen in Manhattan, N.Y., as the jury deliberates in the case against Ghislaine Maxwell on Dec. 21, 2021. The 59-year-old Maxwell is accused of helping the financier Jeffrey Epstein recruit and sexually abuse four underage girls. (Photo by Spencer Platt/Getty Images)
Judiciary

NEW YORK—The jury in the Ghislaine Maxwell sex-trafficking trial continued to deliberate for its second full day on Dec. 22.

No verdict was reached.

The original schedule for the trial gave jurors the days off on Dec. 23 and Dec. 24 for the Christmas holiday.

At about 3:40 pm (EST), Judge Alison Nathan and both teams of attorneys assembled in the courtroom.

Since no verdict had been reached, she sent a note to the jurors asking them if they’d like to continue on Dec. 23, and if yes, during what timeframe.

Moments after that, a reply came back for the first note.

A juror wrote, “No, thank you,” plus an asterisk with the additional words, “Jurors have made plans for tomorrow.”

Everyone left the courtroom and returned, along with the jury, for a 4:30 pm dismissal.

The former socialite awaits the jury’s verdict on six charges—four for sex trafficking minors and two for perjury.

Deliberations will continue on Dec. 27.