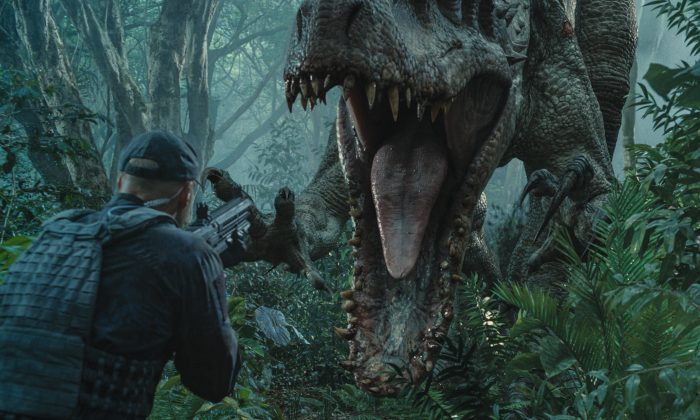 Jurassic World Reviewed by a Dinosaur Expert: It Isn’t Faithful to Science, but so What?

Jurassic World is shaping up to be a monster success, to say the least. The fourth instalment of the Jurassic Park series has become the first film to take more than $500m (£330m) in its first weekend (Harry Potter and the Deathly Hallows set the previous record with $487m in 2011). And there seems a good chance this will continue: audience and critics’ ratings on Rotten Tomatoes are north of 70%, good numbers at a time when ever-more-cynical moviegoers have endless summer blockbuster CGI-spectacles to choose from.

Yet one group seems resolutely determined not to catch Jurassic fever. Step forward, my fellow palaeontologists. Of those who have been asked their opinions on Jurassic World, some have been positive, others lukewarm, but the vast majority have spawned articles along the lines of “palaeontologists slam Jurassic World”.

I suppose it’s a headline that gets people clicking. But they make palaeontologists look like grouchy whiners, disparaging a film because of nitpicky inaccuracies in the dinosaurs. The raptors hold their hands wrong, the mosasaur is too big, the T.rex moves too fast, the colours of the dinosaurs look too much like crocodiles and not enough like birds. And that’s just a taster.

The contradiction is that palaeontologists are usually some of the giddiest, happiest, most enthusiastic people I know. We study the most fantastic, stupendous creatures that ever lived in the 4.5bn-year history of our planet, so cynics need not apply for our jobs. We love our dinosaurs, love talking about them, and love it when we can share our passion with others.

The Power of Jurassic Park

Personally I think Jurassic World is a great thing for my discipline. I saw the film this weekend and loved it. It was a good monster movie. I was able to suspend my paleontologist’s brain for a few hours, forget about the scientific flaws, and have fun.

I kept thinking back to 22 years earlier, when I saw the original Jurassic Park in cinemas in 1993. I was a nine-year-old kid, frittering away a humid summer in the mid-western US, spending long days playing baseball with my neighborhood friends. I didn’t care much for science. It was my least favorite class in school. But I remember being awed by the dinosaurs in Jurassic Park. I didn’t become obsessed with them right away – that came about five years later – but the film brought science to life in a way that no book, museum or classroom lesson ever did.

For youngsters of this generation, Jurassic World will be a cultural milestone – just like in 1993. It will get people talking about dinosaurs, thinking, reading, doing web searches about them, asking their teachers, going to see them in museums. In my eyes, anything that gets people thinking about the world around them, the deep history of our planet, and the relationship between man and nature is a good thing.

Movies like Jurassic World can also have a great influence on science and scientists. The first Jurassic Park was probably the single most important thing that happened to palaeontology over the past half century. It inspired a huge number of people to study dinosaurs. Many palaeontologists of my vintage (aged 25-35) will say that it set them on their career path. This will undoubtedly be the case with Jurassic World as well, and it may even boost the take-up of other sciences. Maybe the person who eventually cures AIDS, discovers a new type of renewable energy or solves world hunger will have been hooked into science by Jurassic World.

The first Jurassic Park also led many museums and universities to hire dinosaur experts, and catalysed a burst of funding for palaeontological research. Some of the proceeds from Jurassic Park even went to fund original science, through the Dinosaur Society and the Jurassic Foundation. The latter is still active and bankrolled two of my projects as a student: a trip to China to describe the wacky meat-eater Monolophosaurus and fieldwork in Portugal discovering and excavating the “super salamander” Metoposaurus. My career may have never gotten off the ground if it wasn’t for these grants. If any of the executives from Universal or Amblin happen to be reading, I really hope that some of the staggering box office haul from Jurassic World can be pumped into research this time around.

Yes, some of the scientific inaccuracies in Jurassic World are a little annoying. I wish the dinosaurs were feathered, for instance, as we know many would have been from spectacularly preserved fossils. But Jurassic World is not a science documentary, and we shouldn’t expect it to be (unlike the recent T.rex autopsy that I was involved in).

This is entertainment. They make it very clear that the dinosaurs they feature are movie monsters quite unlike anything that actually lived during the Jurassic period. The film’s villain, Indominus rex, is a genetic mash-up of tyrannosaur and raptor and all kinds of other stuff. To even begin talking about this creature’s scientific accuracy would be like a bat specialist discussing the fine points of Batman’s anatomy and biomechanics.

To colleagues who have been bugged by all the inaccuracies, I ask: does it really matter that many people will think dinosaurs were a little bigger or toothier or scalier than they were in real life? Does it matter that the original Jurassic Park incorrectly showed T.rex sprinting at highway speeds or Velociraptors that were larger than the real thing? To those of us who study dinosaurs for a living, these matters may seem important, even existential. In the grand scheme, they’re noise. When a film has the potential to both inspire and entertain people, to the point of changing lives, I say, bring on the sequel.

Stephen Brusatte is Chancellor’s Fellow in Vertebrate Palaeontology at University of Edinburgh. This article was originally published on The Conversation. Read the original article.