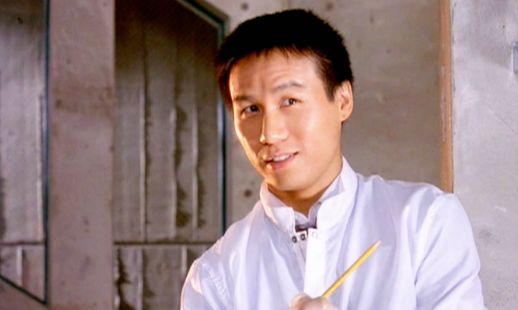 Unfortunately that won’t be Jeff Goldblum, who recently expressed interest in returning but said he hasn’t gotten any calls.

Though Wu featured prominently in Michael Crichton’s book Jurassic Park, he was only in one scene in the movie.

“He had a much larger role in the original novel, he was the engineer of this breakthrough in de-extinction,” Colin Trevorrow, the film’s director, told IGN. “He spent two decades living in Hammond’s shadow, underappreciated. We think there’s more to his story.”

As for why other characters aren’t coming back, Trevorrow added:

“I know a lot of fans want to see the original characters back. They’re iconic. But I respect those actors too much to shoehorn them into this story for my own sentimental reasons. Jurassic Park isn’t about the bad luck of three people who keep getting thrown into the same situation. The only reason they’d go back to that island is if the screenwriters contrived a reason for them to go…”

Trevorrow also gave details about the new characters who are being played by Chris Pratt and Bryce Dallas Howard.

“[Pratt’s] a classic hero in a very modern context. He’s the guy who will get you through the jungle alive – but like Malcolm, Grant and Sattler, he’s an expert in a scientific field that’s connected to our story. The character allows us to explore some new ideas about our relationship with these animals, without losing the humor and sense of adventure. He’s a great contrast for Bryce Dallas Howard’s character, who starts off very corporate, very controlled. Until the running and screaming starts. Then they need each other.”

The movie is set for a June 12, 2015 release date and filming is slated to start soon in Hawaii.