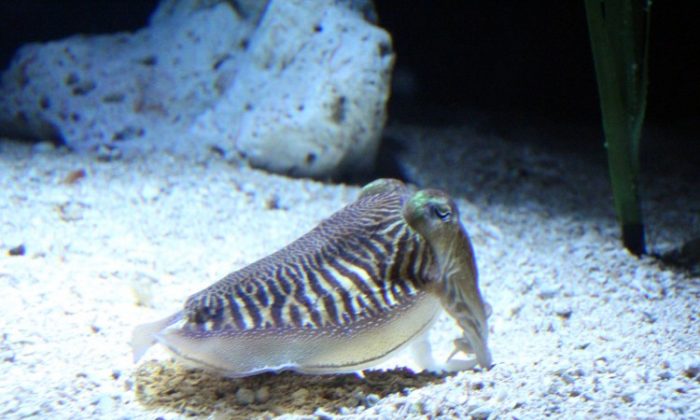 The pigment in ink from a 160-million-year-old fossilized squid has the same composition as that of Sepia officinalis, the common cuttlefish. (Stephanie Lam/The Epoch Times)
Science

The ink from 160-million-year-old giant squid is basically the same as the pigment used by living cephalopods to screen themselves when escaping predators.

An international multidisciplinary research team compared the preserved melanin from two fossilized ink sacs found in England with that of Sepia officinalis, a common cuttlefish species in Europe.

“Though the other organic components of the squid we studied are long gone, we’ve discovered through a variety of research methods that the melanin has remained in a condition that could be studied in exquisite detail,” said study author John Simon at the University of Virginia in a press release.

Typically, organic animal tissue rots rapidly, but melanin takes a long time to degrade. The team used a variety of methods to separate the pigment from the inorganic material in the fossils.

“Out of all of the organic pigments in living systems, melanin has the highest odds of being found in the fossil record,” Simon said. “That attribute also makes it a challenge to study.”

Simon said that the combination of complementary methods used to analyze the specimens could be important for finding preserved organic matter in other fossils.

“It was really the more holistic approach that fully characterized it and allowed us to actually do a real comparison between what existed during the Jurassic period and what exists now,” he explained.

“It’s also given us a handle on ways of identifying organic components in fossils that might have been missed using standard methods.”

The findings were published online in Proceedings of the National Academy of Sciences on May 21.