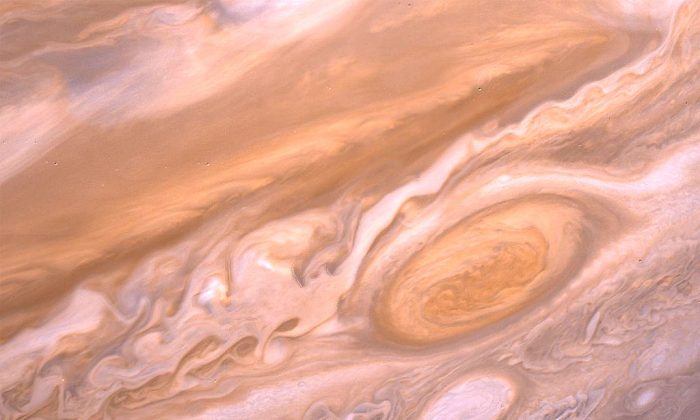 Jupiter’s Great Red Spot was much bigger when photographed by Voyager back in 1979. (NASA)
Science

Jupiter’s Great Red Spot Could Disappear in a Generation

NASA revealed yesterday that the iconic Great Red Spot on Jupiter has shrunk to its smallest size ever – and astronomers have no idea why.

The Great Red Spot is a giant anticyclone storm that has been raging for at least 400 years, when astronomers were first able to build a telescope large enough to notice it. How it formed and has even lasted this long is still a mystery.

The first observations in the 1800s measured the storm to be about 41,000km across – wide enough to comfortably fit three Earths (the Earth’s diameter is about 12,700km). But by 1979-80 when the Voyager spacecraft flew by for a closer look it had already shrunk to 23,335km.

Now with the incredible precision of the Hubble Space Telescope astronomers were able to accurately measure the extent of the Great Red Spot over the past 20 years and found that it’s been shrinking by about 1,000km per year.

The Great Red Spot’s width is about 16,000km – still big enough for the Earth to fit within the eye of the storm – but at current rates of shrinking it could be gone by 2030, depriving the next generation of astronomers of one of the solar system’s most enigmatic objects.

While the shrinking has been hinted at before, the quality of the Hubble Space Telescope images have made it clearer than ever, as well as revealing a possible reason behind this amazing disappearing act.

Thanks to the superb resolution of the Hubble Space Telescope astronomers have seen the Great Red Spot swallow smaller “eddies” or whirlwinds which might be somehow cancelling out the giant storm.

To confirm this we need to measure the speed and direction of the winds in these eddies. This is a topic of intense research as there may only be a few years left to study the storm before it’s gone.

On Earth we get anticyclones (regions of highest pressure on a weather map) but they don’t last long as eventually they pass over land which drains the energy from the storm.

But Jupiter – the fifth planet from the sun – is a gas giant. It doesn’t have a land surface to slow down its storms so they can continue to build.

The problem for astronomers though is that current theories show the planet isn’t spinning fast enough to power up a storm this large. So how did the Great Red Spot get so big?

One way to form such a large storm was seen by astronomers in 2000 as they noticed the formation of a new storm on Jupiter, known as the Oval (or Little Red Spot), through the merger of three smaller systems.

This suggests that Great Red Spot might just be a particularly successful storm in capturing neighbours to power itself to this size.

The Great Red Spot isn’t the only large storm in the solar system. In particular there’s the Great Dark Spot on Neptune. This is nearly as big as the (shrunken) Great Red Spot but only seems to last a few years at a time before vanishing.

Mysteries of the Spot

One of the most striking features of the Great Red Spot is its colour. It can change hue from blood red to salmon pink to nearly indistinguishable from neighbouring clouds, all in the space of months.

Even though astronomers have studied this feature for hundreds of years this is still a mystery. The colour is believed to result from complex organic molecules or sulphur-based compounds, which can also change colour when exposed to sunlight at the top of the storm, but we don’t know for sure.

The Great Red Spot may be a fraction of its former size but the storm clouds still tower 8km above their neighbours, with winds at the edge of the storm racing around the eye at hundreds of kilometres per hour. The entire storm itself takes six days to make a lap of the gas giant (although thanks to the rapid spin of Jupiter we see it come in and out of view every 10 hours).

There is always the chance that it might yet rebuild itself by engulfing a neighbouring storm, surprising astronomers yet again.

Regardless of the fate of the storm, it’s captivated astronomers and the public imagination alike for hundreds of years and will live on in the gorgeous images that the Hubble Space Telescope have managed to capture.

In many of the school-talks I give the Great Red Spot is one of the favourite topics of the class. There’s something about a world-devouring storm that captures kids’ imaginations!

Thanks to this latest finding though the tempest is just a little less grand and for the next generation may have all but disappeared.

Alan Duffy is affiliated with the Australian Research Council (ARC) Centre of Excellence for All-sky Astrophysics (CAASTRO). This article was originally published on The Conversation. Read the original article.