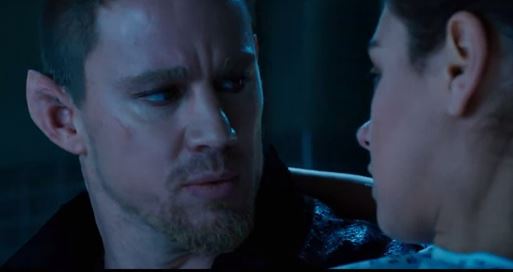 The Jupiter Ascending movie is set for a July 18, 2014 release date, and a trailer has already come out.

The plot is set in a seemingly technologically advanced universe where humans are near the bottom of the evolutionary ladder.

A young destitute human woman (Mila Kunis as Jupiter Jones) is targeted for assassination by the Queen of the Universe because her very existence threatens to end the Queen’s reign.

In the trailer, we see Channing Tatum as Caine seeking to rescue Jones. He is a half albino, being a hybrid wolf and human.

The film comes from the Wachowski siblings, which created the Matrix trilogy and last year’s Cloud Atlas.

The filming was quite a lot of work, Tatum told Collider last year.

“We are breaking ground on—I mean it’s a tough shoot.  We’re doing stuff that’s never been done, inside the camera, in the CG world, and the physical stuff.  There’s very little, if not no, digital stuntmen in the movie.  All the stuff is really real and it’s been hard figuring it out because they don’t like doing anything that’s been done before.  So we’re definitely doing some new stuff, so hopefully everybody likes it.  And it’s fun, it’s got some cheek to it.  It’s a cheeky movie a little bit.”