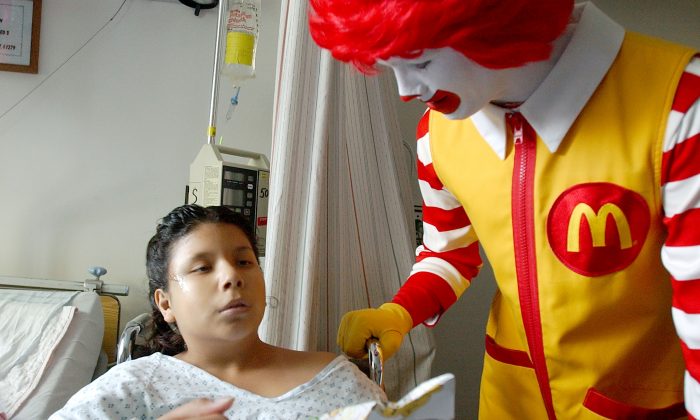 Ronald McDonald meets with a 9-year-old girl at the San Jose Medical center in California in this file photo. (Justin Sullivan/Getty Images) 9-year-old Amanda Cardenez December 18, 2001 at a visit to San Jose Medical center in San Jose, CA. McDonald flew in a CalStar medical helicopter to Bay Area hospitals to bring gifts to children. (Photo By Justin Sullivan/Getty Images)
US

Fast Food Being Sold in Dozens of US Hospitals (+Map)

Fast food is being sold in dozens of hospitals across the United States, a doctors’ group found in a study of more than 200 public hospitals.

The report notes that patients, doctors, and others used to be able to smoke cigarettes in hospitals, after purchasing them at shops inside the facilities, and it compares the present situation to the former health hazard.

A major problem associated with fast-food businesses is some of the contracts stipulate that leases with the fast-food chains will be broken if they don’t reach $1 million in sales per year. And the monthly rent in some of the locations, such as Ben Taub General Hospital in Texas, will rise as food sales increase.

At Georgia Regents Medical Center/Children’s Hospital of Georgia, McDonald’s is even allowed to deliver meals straight to hospital beds.

The findings come as an investigation by The Sun revealed that 128 stores in British hospitals, such as Burger King, Costa Coffee, and Greggs, sell junk food.

“The junk food industry’s aggressive and irresponsible marketing has even been allowed to hijack the very institutions that are supposed to set an example: our hospitals,” noted Aseem Malhotra, M.D., a cardiology specialist at the Royal Free Hospital in London, in a report in the British Medical Journal titled “It’s Time to Ban Junk Food on Hospital Premises.”

“We read every week, in The BMJ and other leading medical journals, of research detailing the perils of sugar and fizzy drinks,” Dr. Sally Norton, a medical consultant, told the Daily Mail. “We frequently hear laments about the cost to the NHS of the epidemic of obesity and type 2 diabetes, which is threatening to engulf us. And yet, the National Health Service, which I understood to be an organization that promotes and supports health (rather than just treating disease), is actually contributing to the problem.”

There is some good news—at least four hospitals in the United States have removed junk food recently, amid a growing trend among hospitals to carry more fruits and vegetables, sometimes from their own blossoming gardens.