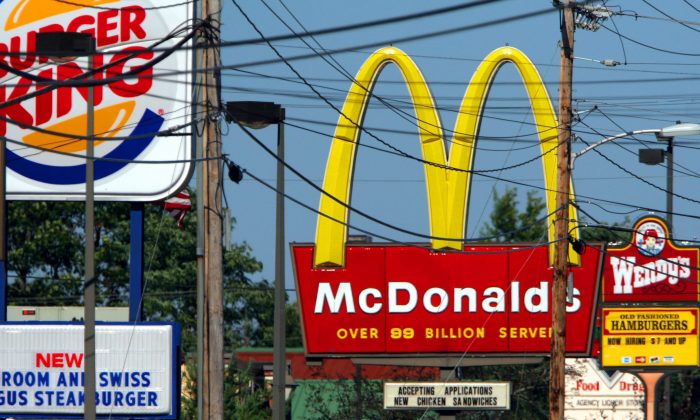 Failing to set our youth on a path to a healthy relationship with food can lead to significant health problems—both now and in the future. (AP Photo/Pat Wellenbach, File)
Canadian Content

We shield our children and young teenagers from many things: overt portrayals of sex and violence on TV and in movies, drinking alcohol, smoking, owning guns, and signing contracts, to name a few.

The reasons are sound: We hope to keep our youth from physical and psychological harm and to prevent them from falling into bad habits or taking actions with long-term consequences they may not fully understand.

We protect them so they can have the best possible future.

Yet we let them down in one vital area: a healthy relationship with food. We leave our youth alone and exposed in a brutal marketplace.

Failing to set our youth on a path to a healthy relationship with food is leading to significant health problems now—and promising shorter and sicker futures.

Since 1979, the number of Canadian children with obesity has tripled, with almost one in three children now overweight. Increases have been highest among youth aged 12 to 17.

Evidence shows that obesity rates are influenced by the amount of marketing kids are exposed to. It puts them at risk for many health problems, including heart disease, stroke, and diabetes.

Evidence shows that obesity rates are influenced by the amount of marketing kids are exposed to.

Marketing is big business and it’s sophisticated. Millions of dollars are spent targeting children and youth through multiple channels, including TV and social media. New Canadian research reveals that over 90 percent of food and beverage product ads viewed by kids and teens online are for unhealthy products. The most frequently advertised products on sites frequented by teens include cakes, cookies and ice cream, cereal, restaurants, and sugary drinks.

Against this backdrop of pervasive marketing is the fact that less than half of Canadian youth ages 12 to 19 eat the recommended minimum of five servings of fruit and vegetables daily.

Children who view TV fast-food ads are approximately 50 percent more likely to eat fast food. Regular consumption of fast food is associated with ingesting an extra 800 calories a week for boys and 660 calories for girls, translating into a possible weight gain of 4.5 kg (10 pounds) or more a year.

Quebec saw the light years ago. Since 1980, that province has banned all commercial advertising directed at children under age 13.

Legislation before Canada’s Senate similarly proposes a ban on the advertising of food and beverages to Canadian children under 13. The proposed legislation is an excellent first step. But it needs to be amended to protect children up to age 16. We need to give healthy eating habits a fighting chance.

Other countries, like the United Kingdom, have similar restrictions on food and beverage advertising to children up to 16.

There’s increasing evidence that teens are particularly vulnerable to food and beverage marketing and consume more of it than children. The actions and reactions of teenagers are often guided by the parts of the brain connected to emotion and reward/gratification; this makes teenagers very susceptible to unhealthy impulses—which will surprise no parent. Research also shows teens can critique advertisements when prompted, but on their own are likely to believe advertising and accept misleading claims.

In a survey of 128 international experts on food, nutrition, and obesity, most respondents recommend restrictions on food and beverage advertising until at least age 16, and more than half recommended an age 18 restriction.

When we want a young person to grow up with certain values and behaviours, we ensure that’s what they are taught, see consistently from role models, and experience themselves. It’s called good parenting and good education.

So why do we allow our young people to be continuously bombarded with the opposite of good eating messages and then expect them to grow up with healthy eating habits?

It’s time we added food and beverage advertising to the list of protections we afford our children and teenagers.

Dr. Tom Warshawski is an expert with EvidenceNetwork.ca, chair of the Childhood Obesity Foundation, and an associate clinical professor of pediatrics at the University of British Columbia. Mary Lewis is VP Research, Advocacy and Health Promotion, Heart & Stroke. Heart & Stroke and the Childhood Obesity Foundation are founding members of the Stop Marketing to Kids Coalition, whose goal is to restrict food and beverage marketing to Canadian children and youth (www.stopmarketingtokids.ca).