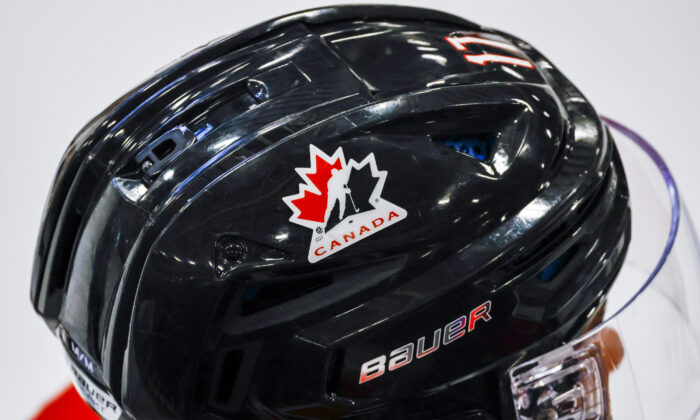 A Hockey Canada logo is visible on the helmet of a national junior team player during a training camp practice in Calgary on Aug. 2, 2022. (The Canadian Press/Jeff McIntosh)
Canada

A junior hockey captain has died while participating in a tournament in the town of Ayr, Ontario on Aug. 30.

Eli Palfreyman, 20, passed away while playing in a pre-season tournament game for the Ayr Centennials of the Greater Ontario Junior Hockey League (GOJHL).

Palfreyman was playing with his team as part of the Ayr Farmers Mutual Global Invitational Tournament, a five-day tournament featuring six teams representing regions within Ontario, the United States, and Germany.

The tournament was initially scheduled to run from Aug. 27 to Aug. 31, but all games on the final day were later cancelled by the GOJHL, citing a “medical incident.”

Palfreyman collapsed in the dressing room at the North Dumfries Community Centre hockey arena during an intermission, according to media reports.

No cause of death was announced.

In an emailed statement, the Ayr Centennials said they were “devastated” by the tragedy.

“We are asking for your prayers and support for Eli’s family and each of our players. Our Centennial’s organization and the community of Ayr are in mourning,” said vice-president Brian Shantz in the statement.

“Eli had the best of care from our medical staff and quick response from the ambulatory staff. Medical doctors will have more answers for us in the coming days.”

“Out of respect for the family’s right for privacy we will not speculate on anything at this very difficult time,” he added.

Thank you all for the outpouring of love for our beloved captain and beautiful young man Eli. Words cannot describe how much it means to his family/Cens family. We are all broken but feel your arms around us ❤️ #RIP17 ❤️ pic.twitter.com/bUdyoyoogj

Palfreyman was named captain of the team on Aug. 25—five days before his death. He had served as assistant captain in the prior season.

In a video posted by media outlet 519 Sports Online on Aug. 26, Palfreyman said it was an honour to be named captain, during an interview.

“Ever since I moved to Cambridge, I’ve been coming to see games in Ayr,” he said. “To be part of the organization last year as an assistant captain was an honour and [to] be coming back this year, my final year, as the captain, words don’t explain how honoured I am to be in this position.”

In a tweet on Aug. 31, the Township of North Dumfries expressed their condolences to Palfreyman’s team and family.

“On behalf of Mayor [Susan] Foxton, members of Council and our community, our thoughts are with the family, the Ayr Centennials’ players, management and executive, during this difficult time,” the township wrote.

“The flags at the North Dumfries Community Complex have been lowered to half mast.”