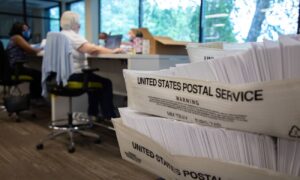 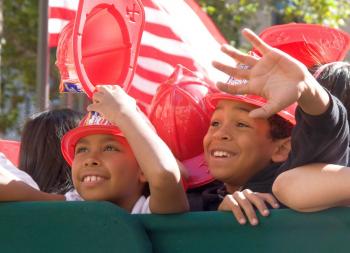 Amidst shining fire trucks and a team of tough firefighters from the New York Fire Department, the children from over 50 elementary schools learned about fire safety.

In the center of a crowd of kids, eight-year-old Nelson Estrella II said, “When there is a fire, and the door handle is hot, then you can’t go out there.”

Seven-year-old Emily Cruz added that New York firefighters should “keep on doing the right thing. Helping other people to get out.”

Both Nelson and Emily are from the Old South Elementary School in Queens.

The pinnacle of the day for the children was the rescue of FDNY Mascot, Hot Dog, from a roof by firefighters while thousands of children cheered.

The event marked the start of the annual National Fire Prevention Week. Fire prevention week was established 80 years ago to commemorate the Great Chicago Fire, on October 8, 1971, which killed more than 250 people and left 100,000 homeless.