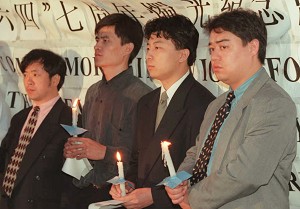 Zhou Fengsuo (2nd from left) is shown taking part in a candlelight vigil 10 years ago which commemorated the anniversary of the Tiananmen Square Massacre. Zhou recently spoke at a forum in San José, California. (Richard Ellis/AFP/Getty Images)
China

Representatives from the US-Japan-China Comparative Policy Research Institute gathered in San José's Martin Luther King Library last Sunday in an open forum titled “China's Future and Sino-American Relations.” The forum was held to mark the 17th commemoration of the Tiananmen Massacre, a crackdown on student-led demonstrations protesting China's economic instability and political corruption, a subject that still remains taboo in China to this day.

“For 17 years, I have been looking forward to a day of truth in China. Today, we, those who live through the dreams and tears of the protesters who were striving for a free China, who survived the Massacre, prison and exile, still have to fight for China to acknowledge what really happened,” Zhou Fengsuo said in his statement. A former student leader, Zhou, who currently resides in San Francisco, remains active in efforts to bring democracy to China.

The violent crackdown on unarmed Beijing civilians on the dawn of June 4, 1989, was a culmination of a series of pro-democracy protests by people from all walks of life. The protest was triggered by the death of Hu Yaobang, former General Secretary of the Communist Party, who was seen as a symbol of anti-corruption and political reform. Protesters called for press freedom and voiced other complaints concerning inflation, housing, and salaries.

The forum in San José included live dialogue with several Chinese human rights activists. Huang Qi, who was awarded the Cyber-Freedom Prize by Reporters Without Borders in 2004 for his website dedicated to helping Tiananmen Square victims, was one of them. He recently helped Tang Deying, who lost her 15-year-old son under police custody during that period, get compensated. Tang Deying received 70,000 yuan ($8,738) in the form of a subsidy. Huang Qi stated he will strive to continue fighting until Tiananmen Square matters are completely redressed by the government.

Ma Shaofang, a former Beijing Film Academy student, stated that despite being released from prison 14 years ago, he nevertheless still feels imprisoned up to this day. “This wall is not a physical wall, but there's a wall that separates the truth,” said Ma. He feels that the government, refusing to acknowledge what happened on June 4, 1989, still insists on its ideology of maintaining absolute control over every aspect of its citizens' lives.

When asked about what people who live overseas can do to help, Zhou answered, “First thing we should do is to make our voices heard, to let people who are suffering know that there are people who care for them, and to make sure that their names appear everywhere.” He then explained that he was released from prison due to international pressure and added, “…sometimes it can make a difference of life and death.”