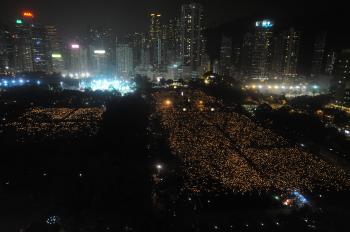 About 150,000 participated in a candlelight vigil in Hong Kong's Victoria Park to commemorate the 21st anniversary of the 1989 Tiananmen Square massacre. (The Epoch Times)
World

HONG KONG—To commemorate the 21st anniversary of the Tiananmen Square massacre, the Hong Kong Alliance in Support of Patriotic Democratic Movements in China (the Alliance) held a candlelight vigil in Victoria Park on June 4, 2010.

To date, Hong Kong is still the only place on Chinese soil where memorials to the Tiananmen Square massacre are allowed.

Szeto Wah, Alliance chairperson, said at the vigil that although he is 79 years old and suffers from cancer, he would attend future memorial activities with supporters as long as he lives.

Szeto said this year's activities organized by the Alliance have encountered more interference than in prior years. The police confiscated two statues of the “Goddess of Democracy” and a relief sculpture (carving) depicting the massacre and arrested 13 staff workers.

In addition, the Chinese University of Hong Kong (CUHK), claiming “political neutrality,” initially refused to allow the new “Goddess of Democracy” statue to be shown on campus.

Though Szeto anticipates more obstructions, he said the Alliance would be more resolute and take measures against suppression.

He paid tribute to CUHK students for their efforts to place the statues and the “Tiananmen Square Massacre” relief sculpture on campus. Szeto regards the efforts as a symbol of the older generation’s will to pass on the torch and called on the younger generation to further the cause in addition to participating in the procession and vigil.

Eric Lai, president of the CUHK student union, said the university’s refusal to admit the new statue was tantamount to inhibiting free speech. He appealed to the university to support the statue’s long-term public display and urged the public to convey the statue to the university after the candlelight vigil.

After the vigil, over 40 demonstrators protested at the Liaison Office of the Central People's Government in the Hong Kong Special Administrative Region. The police warned the demonstrators through loudspeakers that this was an illegal assembly because they had not applied for a permit.

The “Goddess of Democracy” statue and the relief sculpture were transferred to the CUHK campus just after midnight on June 4. A large number of students and citizens welcomed them warmly along the way.

Prior to this, CUHK authorities, who had initially refused to admit the new statue of the “Goddess of Democracy” onto campus, gave in after drawing criticism from all sides for failing to tolerate different views.

After the vigil, the student union erected the new statue in the plaza outside the CUHK railway station. University officials said the display of the two statues is a temporary measure, and they will continue to work with students to discuss future arrangements of the exhibits.

Twenty-one years have passed since the Tiananmen massacre on June 4, 1989, and though the Hong Kong government has also exerted increasing pressure to suppress commemorations in recent years, this has not stopped the Hong Kong public and visitors from mainland China from participating in memorial activities.

Interviewees told The Epoch Times that available space for Hong Kong's political activities has been shrinking since 1997. They have no illusions that the Chinese communist regime will redress any of the injustices committed against the Tiananmen Square democratic movement, but they say that by participating in memorial activities, people may come to reflect on the difference between dictatorship and democracy and to recognize the value of democracy and freedom.

A group of three secondary school students said that this was their first participation in the candlelight vigil and they know the background of the event because the school had invited Mr. Szeto to speak.

A student surnamed Ma told how his parents were in their 20s when the massacre happened and that they had participated in the 1.5 million people’s march in 1989. He said his parents are very supportive of the commemoration and asked him not to forget the massacre.

A teacher surnamed Li, who led a group of students to the vigil, said that this was the second time she had brought students to participate in the event. Because of the recent suppression from the Hong Kong government, she said she has doubts about the communist regime’s promise of “one country, two systems.”

Mr. Sun, from mainland China, said that he believes pressure from the Hong Kong government will cause more people to become involved.

The candlelight vigil ended at 10:00 p.m. The Alliance announced that 150,000 people participated in the memorial activities, while the police estimated the event had about 113,000 participants.