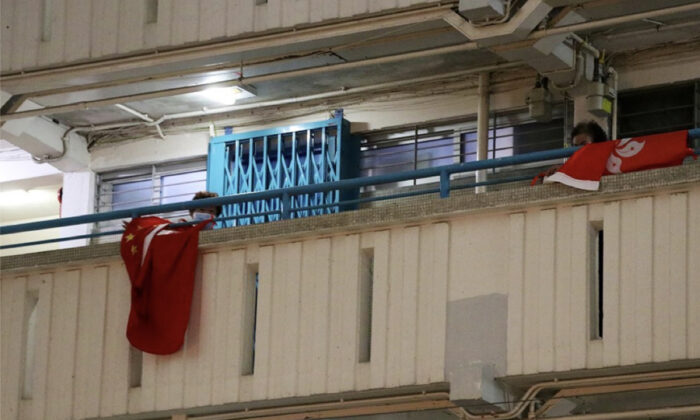 On Jun 26, 2022, people are retrieving flags due to concerns of more possible vandalism in areas of Hong Kong. (Photo by The Epoch Times)
HK Current Affairs

July 1 is the anniversary of the handover of Hong Kong to China. As the date approaches, Hong Kong becomes a sea of red, decorated with Chinese Communist Party (CCP) flags and Hong Kong regional flags.

However, many of the five-star CCP flags and the bauhinia flags of Hong Kong have been defaced or stolen.

Scholars believe that it is a manifestation of anger toward the CCP and its installed Hong Kong government.

Hong Kong Police were called to multiple estates in Ping Shek and Ngau Tok Kok in Hong Kong to investigate cases of the CCP flags being defaced or stolen.

The Hong Kong Police have classified the cases as insulting the CCP flag and theft, and has handed the cases over to the third Criminal Investigation Team of the Sau Mau Ping Police District for follow-up. As of writing this report, no one has yet been arrested.

Reporters of The Epoch Times went to one of the buildings in Ping Shek Estate. People in the estate were collecting the flags and packing them up. The reporters found out that the neighborhood committee was concerned about the flags again being destroyed and ordered them to be away.

It is understood that the flag-hanging mission was carried out by the Kowloon East Chao-ren Association, which belongs to the pro-establishment camp. According to the association’s response to the media’s query, about 11,500 CCP flags and Hong Kong regional flags will be hung all over the estates.

Scholar: What is Imposed Will Not be Respected

Professor Chung Kim-wah, scholar and former assistant professor in the Department of Applied Social Sciences at the Hong Kong Polytechnic University, said in an interview with the Epoch Times that a national flag and its anthem will only be respected by the people if the government and social system are respected by the people.

“But right now it is the opposite in Hong Kong. The government essentially is using legislation to accuse any Hongkongers of insulting the CCP flag. Not only is it not appealing to the people of Hong Kong, but some are even disgusted by it.”

Chung said that in the past few years, whenever there was a CCP flag hanging, or CCP anthem playing, disapproving boos followed. Raising a sea of red CCP flags, which places the communist regime above the people, will not gain more respect from Hongkongers. On the contrary, it will just feel like an additional imposition on Hongkongers.

The fact that red flags are hanging everywhere is distasteful and offensive to Hongkongers, Chung said. “Besides, it affects the aesthetics of the city, it should also be considered whether everyone enjoys the view. Has the government ever asked how Hongkongers would feel?”

Chung is not surprised that flags have been vandalized. “Why doesn’t the government follow what Beijing did during the Beijing Olympics to stop people from disrespecting, and raging at the CCP flag?” Chung asked.

Wong Wai-kwok, former assistant professor at the Department of Politics and International Relations at the Baptist University of Hong Kong, shared that it needs to be mutually understood and agreed upon to hang the flags in public. The government should not disturb or destroy people’s living environment in the name of patriotism or the handover of Hong Kong.

When talking about insulting the CCP flag, Professor Wong said pro-Beijing groups also effectively did the same thing as those who were defacing them. “The nation-loving participants would litter and trash CCP flags everywhere after their events, filling the streets with torn up CCP flags; Some people just chucked them in the bin. So there’s a double standard when it comes to punishing those who disrespect or insult the CCP flag. [Is it ok] as long as you are government-friendly?”

When asked whether such accusations would restrict freedom of expression, Professor Wong asked, “Why can’t a national flag be insulted? Just as a national or country leader can be criticized. Why would a citizen love a corrupt government that kills and tortures its people?”

Wong believes that Hongkongers have the right to express dissatisfaction in their own way, like damaging a copy of a national flag. Wong added, “Only totalitarian countries will use a national symbol to restrict freedom of speech and freedom of expression.”