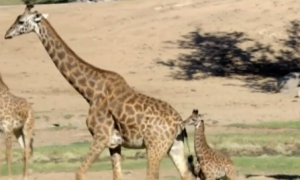 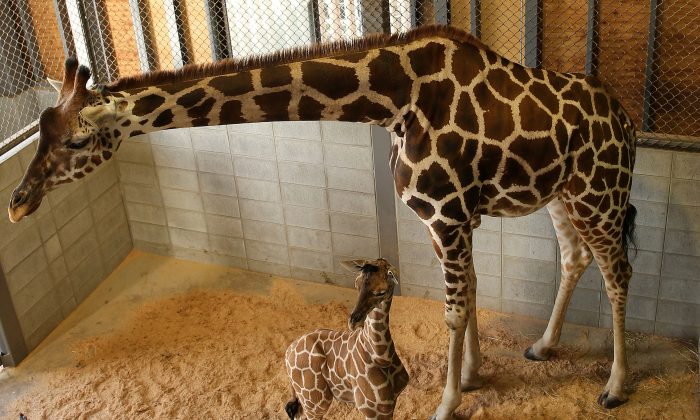 An eleven day old newborn giraffe calf stands beside his mother named Mimi in their enclosure at Himeji Central Park on October 16, 2013 in Himeji, Japan. (Buddhika Weerasinghe/Getty Images)
US

Julius the baby giraffe, who had been struggling since his birth on June 15, died exactly one month later, on Saturday, July 15.

Staff at Maryland Zoo had to euthanize Julius after it became clear that despite around-the-clock care, the 150-pound calf wasn’t improving and there was nothing left to do to help him.

“Despite intensive medical interventions, tube feeding and around the clock care, Julius remained a critical patient,” stated Dr. Samantha Sander, associate veterinarian at the zoo. “His condition took a sharp turn downward overnight, and we had to make the difficult decision to humanely euthanize him.

“This is certainly not the outcome we were hoping for, but we rest assured that we did everything we possibly could medically to prevent him from any distress,” she said.

Julius was healthy at birth but refused to nurse for some reason. Staff at the Maryland Zoo night and day hand-fed Julius. He had a hard time learning to drink from a bottle.

Zoo staff gave him special formulas designed to boost his immune system to provide the antibodies his mother’s milk would have supplied. He was fed via IV with a special solution donated by Mount Washington Pediatric Hospital, and even received two transfusions of giraffe’s blood from Ohio’s Columbus Zoo and Colorado’s Cheyenne Mountain Zoo.

“There are dozens of people who have provided assistance along this journey with Julius,” said Mike McClure, general curator at the zoo. “From zoo giraffe experts to veterinarians to nutritionists and human doctors and pediatric specialists, we utilized every available resource to us.

“We are incredibly grateful to each and every one, including the exceptional assistance of the staff and giraffe herds at The Columbus Zoo & Aquarium and the Cheyenne Mountain Zoo. Without them, we would have run out of options far sooner.”

Julius’ mother, Kesi, stopped producing milk about two weeks after the birth because her calf wasn’t nursing. This put greater stress on the staff. Even so they managed to keep the calf gaining weight—he gained more than 20 pounds in the first two weeks despite not nursing.

By early July Julius was walking around inside the zoo’s giraffe enclosure, and beginning to act like a healthy baby giraffe. Soon after his weight began dropping, however, despite the best efforts of the staff. They tried a variety of feeding formulas, but Julius seemed unable to nurse and unable to learn how to drink from a bottle.

Julius met some of the zoo’s other giraffes on July 7, including his 5-month-old half-sister Willow. Zoo staff hoped that contact with other giraffes would enliven Julius; giraffes are naturally herd animals.

Unfortunately, Julius didn’t seem to have a strong drive to live. Zoo staff finally had to admit that without a feeding tube, he would not take in nutrition.

“It’s hard to put our emotions into words right now,” Don Hutchinson, president and CEO of the zoo, said in a statement on the zoo’s website.

“Our veterinary staff and our animal care team put their lives on hold to try and nurse Julius back to health, and every avenue was explored. Sadly, he was unable to survive in spite of their Herculean efforts.”

Julius’s father, Caesar, has been at the Maryland Zoo since 2008. His mother Kesi was transferred there in 2012 as part of the Giraffe Species Survival Plan, administered by the Association of Zoos and Aquariums.