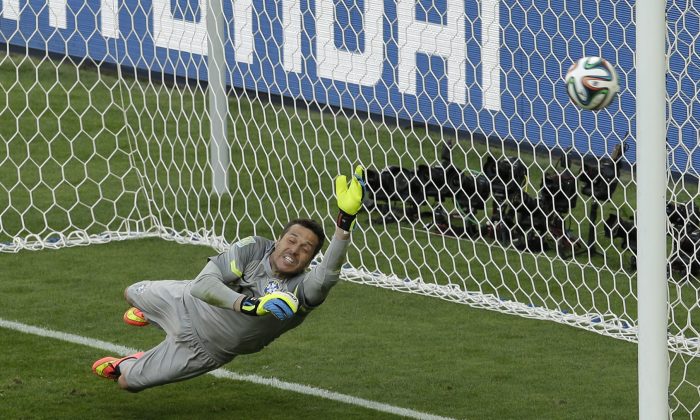 Brazil's goalkeeper Julio Cesar dives for the ball as the decisive penalty hit the goalpost during the World Cup round of 16 soccer match between Brazil and Chile at the Mineirao Stadium in Belo Horizonte, Brazil, Saturday, June 28, 2014. Brazil won 3-2 on penalties after the match ended 1-1 draw after extra-time. (AP Photo/Hassan Ammar)
Soccer

Julio Cesar, the Brazil goalkeeper, received a yellow card for a tackle against Colombia during the quarter-finals of the World Cup.

Brazil is currently up 2-1.

James Rodriguez scored on a penalty.

RIO DE JANEIRO (AP) — It just wouldn’t be the World Cup without Germany in the semifinals.

Harnessing all their big-game experience, the Germans delivered a performance of maturity and efficiency to hold off France 1-0 on Friday and become the first team to reach four straight semifinals in the sport’s marquee tournament.

Defender Mats Hummels capped a fine individual display at both ends of the pitch by scoring the winning goal in the 13th minute, outmuscling his marker at a free kick to glance a header in off the underside of the crossbar.

Criticized for poor defending in earlier matches, Germany selected a more robust lineup and restricted a flat-looking France team to only a handful of clear-cut opportunities in muggy conditions.

“There was not much in it,” France coach Didier Deschamps said. But, “we don’t have the international experience Germany has.”

While France’s young players slumped to the ground and some shed tears after the final whistle, the Germans soberly saluted all corners of the Maracana Stadium.

One job done, nothing more.

Next up for Germany is a meeting with the winner of Friday’s later quarterfinal match between Brazil andColombia. It will be Germany’s 13th appearance in the semifinals in 20 editions of the World Cup.