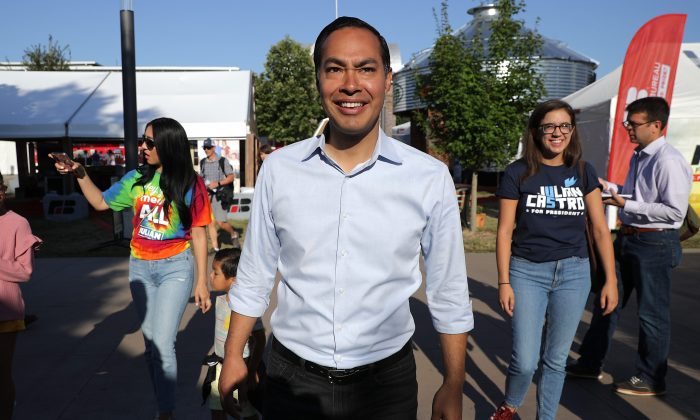 Democratic presidential hopeful Julian Castro said that he was “very proud” of his brother, Rep. Joaquin Castro (D-Texas), for sharing a list of top donors to President Donald Trump’s reelection campaign on Twitter.

Joaquin Castro drew heavy criticism after he posted a list of 44 San Antonians who donated the maximum amount allowed to the Trump campaign. The list included names and businesses.

In his Aug. 5 post, the Texas congressman claimed that the donors’ contributions were “fueling a campaign of hate that labels Hispanic immigrants as ‘invaders.’”

Sad to see so many San Antonians as 2019 maximum donors to Donald Trump — the owner of ⁦@BillMillerBarBQ⁩, owner of the ⁦@HistoricPearl, realtor Phyllis Browning, etc⁩.

Their contributions are fueling a campaign of hate that labels Hispanic immigrants as ‘invaders.’ pic.twitter.com/YT85IBF19u

After the list was posted, one of the donors, Justin Herricks, told The New York Times that he started receiving threatening and harassing calls.

“I’ve had people say, ‘Hey we were gonna use you for business, but we found out you’re a racist. ‘We hope that you burn in hell and your business will go with you,’” said Herricks, who owns Precision Pipe Rentals, an oil and gas services company in San Antonio.
Similarly, CEO of MidAmerican Aerospace Mark Hanrahan told Fox News that he hadn’t been harassed but did receive some “unkind” emails along with some messages of support.
But not all reactions have been negative. Some donors received support from locals after the list was published, such as the restaurant chain, Bill Miller BBQ, which started seeing a boom in business following the publicity.

In an interview with MSNBC’s Kasie DC on Aug. 11, Julian Castro was asked by the program’s host on whether he thought it was the right thing to do.

“Oh, absolutely. I’m very proud of my brother,” Julian said. “And my brother took what is publicly available information that newspapers, other publications regularly do about people who maxed out—made the maximum contribution—to President Trump here in San Antonio and put that forward as he said as a lament to say, wow, just look in this city which is more than 63 percent Hispanic, these big business owners who are on this list, who has basically made their fortune off of the Hispanic community, are putting money into the pocket of a campaign of a president who is turning around and using that money to fund something like 2000 ads to say that there is a Hispanic invasion in the United States.”

“I find that very disappointing, very ironic and I believe my brother had every right to do that and people should know who was funding that campaign of hate,” he added.

Many prominent figures and groups were quick to condemn Joaquin’s actions in posting the list of donors. The National Republican Congressional Committee posted on Aug. 6 that the list was “inciting violence against private citizens for participating in our Democracy.”

This is disgusting. Inciting violence against private citizens for participating in our Democracy is beyond the pale. Your rabid hatred of @realDonaldTrump has made you deranged. https://t.co/vwj9a6EDiT

Similarly, Rep. Ted Cruz (R-Texas) reacted by saying it was wrong to post the list and called on Joaquin to retract it.

“EVERYONE needs to tone the hateful partisan rhetoric way down. This is WRONG & Castro should retract it. In our constitutional Republic, the People rightly hold their representatives accountable; elected representatives should not be vilifying & doxxing their own constituents,” Cruz wrote.

EVERYONE needs to tone the hateful partisan rhetoric way down. This is WRONG & Castro should retract it. In our constitutional Republic, the People rightly hold their representatives accountable; elected representatives should not be vilifying & doxxing their own constituents. https://t.co/rrgQbK7PLU

According to a March poll by national survey research company McLaughlin & Associates, 50 percent of Hispanics approve of how Trump is handling his presidency.

Trump has repeatedly touted record-low unemployment rates among Hispanics and others, including African-Americans and Asians at his campaign rallies.

In February, the national seasonally-adjusted unemployment rate for Hispanics and Latinos aged 16 and up in the U.S. labor force dipped to 4.3 percent, a record low, according to data from the Bureau of Labor Statistics. The bureau first began tracking employment data among Hispanic-Latino’s in 1973.

Moreover, the total number of Hispanics employed in the United States reached a record high of 27,701,000 in December last year.

The president has repeatedly received criticism for his immigration policies that aim to reduce the influx of illegal immigration at the southern border. In recent months, the significant increase of Central American family units crossing the border into the United States had overwhelmed Customs and Border Patrol facilities and resources.