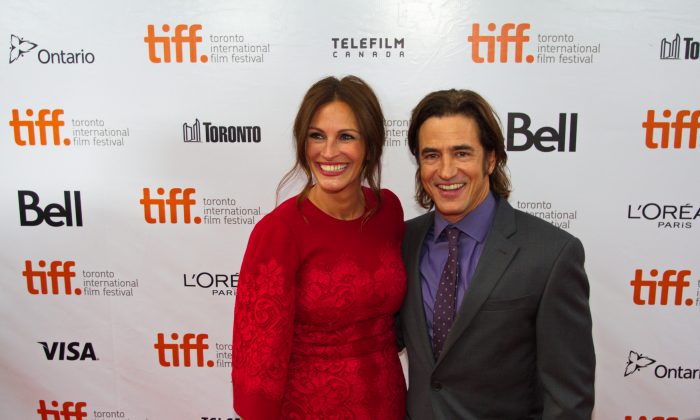 Julia Roberts and Dermot Mulroney at the premiere of “August: Osage County” on Sept. 9. The two also starred in the 1997 hit “My Best Friend’s Wedding.” (Eric Sun/Epoch Times)
Entertainment

Julia Roberts, if rumors are to believed, will be getting a divorce from husband Danny Moder worth $225 million.

The Star Magazine tabloid reported that the two are “fighting over money and kids” and meanwhile, Roberts treats Moder like an “errand boy.”

However, another publication is saying Star Magazine essentially makes stories up to generate interest.

According to Gossip Cop, “There’s no actual evidence of the couple’s marriage crumbling — in fact, you could probably replace Roberts and Moder’s names with the last half-dozen celebrity couples Star has said this about, and have a nearly identical story.”

The site also says that after checking several of its sources, none could verify the “divorce” story.

Another source told the site that Star is “fishing for controversy.”

And as Celeb Dirty Laundry notes, “Do they just spin the wheel and choose the number based on where it lands? Julia Roberts is not worth $225 million, and in fact, most figures peg her net worth at half of that.”

“Of course, Star is not going to rest their laurels on Julia and Danny fighting on a single photo. As such, they’ve also added some stuff about Julia and Danny arguing over their children, fighting over their finances, and Julia treating Danny like ‘an errand boy’. In other news, the grass is green and the sky is blue,” the site says.

Meanwhile, the Daily Mail posted up photos with Robers with her three children in Los Angeles.

Roberts has been married to Moder since 2002.

She talked about putting her family first over her career after having kids.

“By the time we had kids, I had accomplished things and felt secure about that part of my life,” she said earlier this year. She added: “I was so joyful moving into the family phase of my life in a sincere way.”