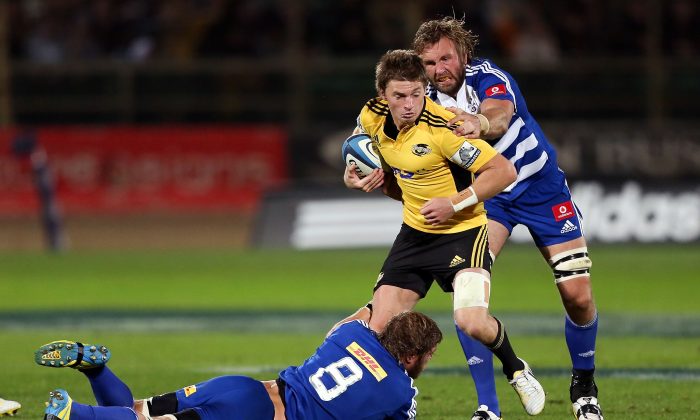 Trying to find rhythm ... Beauden Barrett of the Hurricanes is tackled during the Round 11 Super Rugby against the Stormers at FMG Stadium on April 26, in Palmerston North, New Zealand. (Hagen Hopkins/Getty Images)
International

Tradition is often deemed to be old fashioned, by rugby coaches—and ignored.

Playing to stereotype, the Wellington Hurricanes were adventurous at home against the Cape Town Stormers, who epitomised defence.

Despite the lead changing several times the Stormers won 18-16—although scores were kept low and tight, the Stormers looked like the better side.

Even so, the match would have been drawn, but for rarely seen brilliance by returning Stormers winger, the international Brian Habana. He charged down a conversion taken by Hurricanes flyhalf Beauden Barrett.

That was one of two costly errors by Barrett, who was selected for the All Blacks last year as a flyhalf. The second came when the Hurricanes were attacking the Stormers’ line—Barrett threw a “miracle” long ball, which turned-over possession when a try seemed imminent.

I place responsibility on the shoulders of coach Mark Hammett, who thought his coaching nous was more relevant than tradition. In this case, the wisdom of players specialising in one position.

Taylor has been tipped as a future All Black. He has represented NZ Maori and the NZ under-17 and under-20 sides.

Last year Barrett, 21, played five Tests for the All Blacks. Obviously, he is the key play-maker for the Hurricanes. Suddenly the general was replaced by a new general.

Both Pisi and Barrett did well in their new roles. But against the Stormers, Barrett was back at flyhalf, Pisi was back on the bench and Taylor was back at fullback.

The problem was that Barrett and Taylor were trying to find their “rhythm”, while playing the battle-hardened Stormers. It was an impossible task.

And it was just as impossible, way back when the decision was made to chop-and-change the team.

In his defence, Hammet could say the Hurricanes lost by two points only, and should have drawn. But the failed conversion, rests with Barrett, who was having to “think” his way back into the flyhalf position.

There are good reasons for the specialist-tradition. Some are:
* It is hard to be an expert in one position, let alone two.
* Players develop a “rhythm” where many actions become unconscious, like driving a familiar car down a familiar road. It takes little attention. In rugby, that freedom of mind can be used strategically.
* Playing out of position is like driving a strange car through an unknown city. All attention is focused on the basic job at hand. Even then, mistakes are made.
* Team-mates develop combinations with each other, improving communication and creating an unspoken communication, based on experience, body-language, intuition etc.

Why would Hammett make such a dramatic change?

Hammett was a hooker, playing 78 games for the Crusaders and 29 for New Zealand. Some hard-bitten forwards go through life thinking backs don’t do much, so they under-estimate the difficulty of the job.

For example, the former All Black captain Tana Umaga started as a winger, then moved in one step to outside-centre. Despite playing like a centre when he was on the wing, the talented Umaga took almost two seasons to find his feet as an international centre.

Meanwhile, in Johannesburg, the Waratahs continue their annual ritual of self-destruction.

“I am very disappointed with the officiating, the communication, the language, the ability to decipher and the correct decisions, the basic ones … ,” Cheika said. “It cost my team tonight, I think.”

Bulls captain Pierre Spies had “no issue” with the referee.

“I felt the referee was easy to speak to and easy to listen to,” Spies said, “and he was clear in his descriptions.”

The Queensland Reds made a bold title claim, beating the Blues 12-11 in Brisbane, becoming the first Australian side to defeat all of the New Zealand sides in their “pool”.

Flyhalf Quade Cooper scored all 12 points, and was crucial to the victory, along with fellow international, half-back Will Genia. But it was a team-generated victory, with the replacements fitting seamlessly into the team structure.