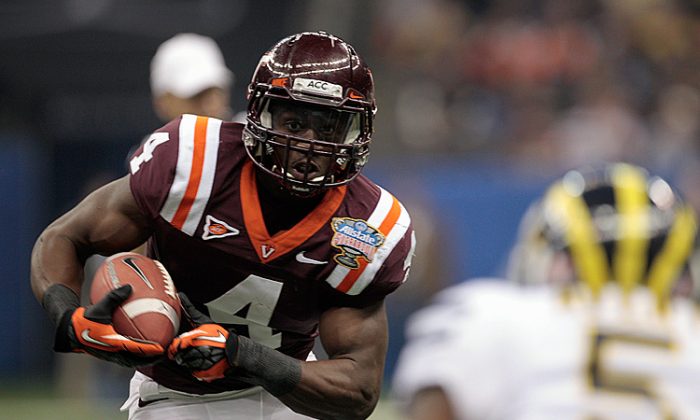 Now that the dust has settled on the Giants draft, it’s time for some early judgments on how they did.

The Giants have had some recent success in getting good players in the draft, even in later rounds. Unlike the Jets, who are normally aggressive in trading up for who they want, the Giants have been surprisingly successful in sitting back and taking whoever is available at their pick. Though the passive philosophy seems to go against the grain of successful drafting, it has worked out well, as evidenced by their two recent Super Bowl triumphs.

How they find these contributors, isn’t quite known, as successful-drafting seems to be a craft few can define. In any case, onto this year’s haul:

David Wilson, running back from Virginia Tech taken with the first-round, 32nd overall pick—Although this writer thought Boise State running back Doug Martin would be an ideal selection here, Martin was taken just one selection earlier by Tampa Bay. But after watching Wilson’s highlight reel, this looks to be a good pick. Wilson, who led the ACC with 1,709 rushing yards in 2011, doesn’t flash a ton of speed but he’s tough to tackle, always falls forward, and is all out on every play. The 5’10, 206-pound back also returned kicks all three years as a Hokie and has two return touchdowns to his credit.

Prediction: The Giants have a much better running back tandem next year, despite the loss of Jacobs, with Wilson and Bradshaw being more of a thunder and lightning combination.

Rueben Randle, wide receiver from LSU taken with the second-round, 63rd overall pick—After a quick glance of what receivers were left after round one, Randle’s name actually popped up first on this writer’s list. The Giants, who had apparently pondered taking him with their first-round pick, must have been thrilled he was available in the second. Randle is 6’4″, 210 pounds and caught 53 passes for 917 yards last season. Judging ability in college players isn’t easy, but Randle just looked like a sure-handed receiver at LSU last year. The Giants will look for him to develop behind Cruz and Nicks after the departure of Mario Manningham.

Prediction: Randle, along with the drafting of Wilson, and following the exits of Jacobs and Manningham, de-bunk the theory that need-based drafting doesn’t work.

Jayron Hosley, cornerback from Virginia Tech taken with the third-round, 94th overall pick—Hosley, 5’10”, 178 pounds, put up some good numbers at corner as a Hokie, leading the NCAA in interceptions in 2010 with nine and ranking in the top five in passes defended each of the past two seasons. He’s also a proficient punt returner, ranking third in the NCAA in return average in 2011 at 16.9 per return. With the strong possibility that Osi Umenyiora might be done as a Giant after 2012 (or possibly before), it would have been nice to see the G-Men take his replacement here, but Hosley’s credentials are hard to argue.

Prediction: The Giants realize having three great defensive lineman is something they have to hold on to and not taking one with this pick signals their intentions to keep Umenyiora beyond 2012.

Adrien Robinson, tight end from Cincinnati taken with the fourth-round, 127th overall pick—Both head coach Tom Coughlin and GM Jerry Reece were very excited about this guy, though it’s hard to see why. Robinson is considered a late-blooming tight end and the new trend in the NFL is using multiple tight end sets and exploiting their matchup as eligible receivers against either a slower linebacker or an undersized safety. But the 6’4″, 264-pound Robinson caught just 12 passes (in 13 games) last season for 183 yards.

Prediction: Whether he ends up an under-appreciated blocking tight end or doesn’t make it in the NFL, we probably won’t hear much from Robinson again.

Brandon Mosley, tackle from Auburn taken with the fourth-round, 131st overall pick—Mosley is a 6’5″, 315-pound kid that the Giants seem to think can also be a guard for them. They also said they were impressed with his workout, though you’d rather have a team be impressed with in-game skills. Either way, if you’re going to take a player that’s a project, it’s better to do so in later rounds to reduce risk as later round picks have smaller rookie contracts.

Prediction: Mosley makes little to no on-the-field impact in 2012.

Note: The Giants traded their fifth-round pick to Cincinnati for linebacker Keith Rivers. Rivers is a good linebacker when healthy but missed all of last season with an injury. As a part-time player he could be a steal. His talent is such that he was the ninth overall pick in the 2008 draft. The Bengals selected safety George Iloka, out of Boise State, with the Giants pick.

Matt McCants, tackle from UAB taken with the sixth-round, 201st overall pick—Coughlin seemed actually more excited about this pick than he did taking Mosley two rounds earlier. The 6’5″, 315-pound McCants was undoubtedly a lesser-known prospect, being that he came from a somewhat-small school. Naturally, it doesn’t matter what school you came from, once you’re drafted. Coughlin thinks he can put him on either the left or the right side.

Prediction: McCants sticks around the NFL longer than Mosley.

Markus Kuhn, defensive tackle from North Carolina State taken with the seventh-round, 239th overall pick—According to Reece, the 6’4″, 299-pound Kuhn, hasn’t been playing football for that long and looks to be a project. If you’re going to look for unknown-quality in the final round usually it can be found at a smaller school or from a player that’s still developing which is what Kuhn is.

Prediction: Kuhn makes an impact, but it’s several years down the line and for another team, as it’s hard to hold on to a “project” player for more than a year.

Overall, the offense-heavy draft for the Giants certainly seemed to be driven by need as opposed to taking the best player available and then figuring out where they all fit in later. As long as you draft good players though it doesn’t really matter.

Picking at the ends of every round obviously diminishes your chances at having a great draft, but their first two picks look pretty solid. If Keith Rivers turns out to be a good defensive-rotation player and they get one of their two offensive linemen to be a solid starter the draft would have to be considered a success.