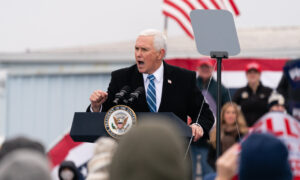 A ballot bin is seen at the Gwinnett County Board of Voter Registrations and Elections offices in Lawrenceville, Ga., on Nov. 7, 2020. (Elijah Nouvelage/Getty Images)
Georgia

Federal judges in Georgia dismissed two Republican lawsuits on Thursday—one in Augusta and the second in Atlanta—which challenged absentee ballot rules ahead of the crucial Jan. 5 Senate runoffs, according to reports.

In Augusta, U.S. District Court Judge Randal Hall dismissed a lawsuit that sought to prohibit the use of drop boxes for absentee ballots and ramp up signature verification protocols, amid charges that the current processes increase the likelihood of voter fraud, according to the Atlanta Journal-Constitution.

In the Augusta lawsuit, the Twelfth District Republicans argued that rules imposed months ago to allow counties to set up ballot drop boxes and let election officials open ballots before Election Day violate state laws and the U.S. Constitution, the report notes. The plaintiffs claimed these rules open the door to potential voter fraud and ballot harvesting. They also argued for stricter rules on signature verification.

Hall said that the plaintiffs lacked standing and that the court shouldn’t change the rules so close to the election.

“We are not even on the eve of an election,” Hall said, according to the Atlanta Journal-Constitution. “We are, as it relates to this particular election, closing in on halftime.”

The judge also said the plaintiffs were not able to show specific harm brought about by the current rules.

“The court finds that those claims are simply based on speculation, highly speculative issues,” Hall said, USA Today reports.

The Senate runoff, which pits Perdue and Loeffler against Democratic candidates Jon Ossoff and Raphael Warnock, is key for both parties, with control of the upper chamber hanging in the balance. Republicans currently hold 50 seats in the Senate, meaning Democrats need to win both runoffs and also prevail in the contested presidential election to gain control of the White House and both chambers of Congress.

Early in-person and absentee voting has already begun in Georgia, with more than 900,000 people having already cast their votes in the twin runoffs, with around half of that by mail, according to the latest data from the state.