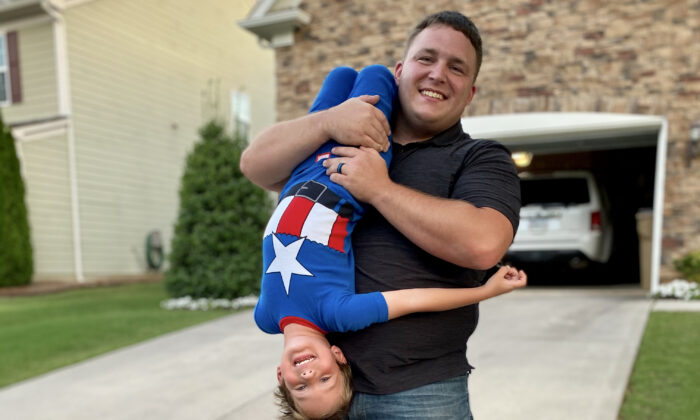 Ronald "Colt" McAbee with his No. 1 neighborhood fan. The former sheriff's deputy was denied bail for the second time in U.S. District Court on Sept. 3, 2022. (Sarah McAbee/Special to The Epoch Times)
Jan. 6 Coverage

Despite audio and video evidence showing former Tennessee sheriff’s deputy Ronald Colton McAbee did not assault a police officer on the Capitol steps on Jan. 6 as alleged by prosecutors, a federal judge again refused the defendant’s motion to be released from the District of Columbia jail pending trial.

The issue took on added urgency on Sept. 5 when McAbee, 28, was twice assaulted with chemical spray by a guard in the District of Columbia jail for not wearing a COVID mask, his wife Sarah told The Epoch Times

“This is just inhumane,” Sarah McAbee said. “It doesn’t even matter what your political beliefs are. You should never treat somebody that way.

“Are we living in the same universe?” she asked. “This is not the America I once knew.”

McAbee was outside the Lower West Terrace tunnel during some of the worst violence on Jan. 6, 2021. Several times, he tried to render lifesaving aid to a dying Rosanne Boyland, 34, of Kennesaw, Georgia. His interactions with Metropolitan Police Department officers resulted in most of the charges. They also served as justification for a U.S. District Court judge to reverse a Tennessee judge’s order and keep McAbee in jail for 397 days—and counting.

Pepper Spray for Not Masking

Ronald McAbee walked out of his cell at the D.C. Central Treatment Facility about 11:30 a.m. EDT on Sept. 5 to retrieve his medication from a cart in the hallway, his wife said.

Lieutenant Crystal Lancaster shouted at him to put on a COVID mask, Sarah McAbee said. When he continued to walk toward the cart without a mask, the guard sprayed him point-blank in the face with oleoresin capsicum (OC), a harsh chemical irritant that burns the eyes, skin, and mucous membranes.

“She sprayed him and he was like, ‘Did you really just spray me?’ ” Sarah McAbee said. “[The Lieutenant] told another corporal in there to handcuff him. And as they were handcuffing him, she sprayed him again in the face. I mean inches away from his face. And they threw him on the ground.”

Three other Jan. 6 detainees—Ron Sandlin, Bart Shively, and Ryan Nichols— began shouting at Lancaster to stop the attack on McAbee, his wife said. Those men were also sprayed and handcuffed. All four were threatened with prosecution. McAbee was threatened with charges of assault and causing a riot, his wife said.

But Sarah McAbee said she is considering legal action against the jail, Lt. Lancaster, and the U.S. Marshals Service.

“One, there was no riot in the pod that day,” Sarah McAbee said. “And two, he was the one being assaulted. How can you charge him with assault?”

McAbee said the U.S. Marshals Service, which is responsible for all federal prisoners and pretrial detainees, told her an investigation of the attack is ongoing. It is being handled by an independent third-party investigator, she’s been told.

After being discharged from medical and thrown in the shower, McAbee later begged to rinse off the remaining oily OC residue when it reactivated. Guards told him to “suck it up” and made him wait 12 hours to shower again, Sarah McAbee said.

Oleoresin capsicum can cause skin blisters, inflamed airways, hypoxia, eyelid spasms, cornea burns, elevated heart rate, and severe nausea, according to Physicians for Human Rights (PHR). It is banned for use in warfare but legal for law-enforcement purposes. It can be fatal if not used properly.

Chemical irritants attack temperature and pain receptors, causing a sensation that McAbee described as like jumping into a hot tub with severe sunburn.

Irritant sprays allow a stream of “potentially higher doses of the chemical agent to directly strike targeted people or groups,” PHR said in a report (pdf) on the use of tear gas and pepper spray by law enforcement.

The U.S. Marshals also did not realize for about a week that McAbee had been moved across the street from the Central Treatment Facility to the Central Detention Facility after the attack, his wife said.

The Marshals Service moved some 400 inmates and detainees out of the Central Detention Facility in November 2021 after a surprise inspection (pdf) found inhumane living conditions. The Central Treatment Facility was found adequate, although there have been persistent complaints about abuse of Jan. 6 defendants by staff since then. Both facilities are run by the D.C. Department of Corrections.

McAbee said she was disappointed but not surprised that U.S. District Judge Emmet Sullivan rejected her husband’s latest motion to be released to home detention until trial. Her attorneys will petition the U.S. Court of Appeals for the District of Columbia Circuit for a review of the ruling, she said.

“You know, this sat in front of him for 117 days before he ruled on it,” she said. “And I think he only ruled on it because the appellate court came down and said, you either rule on it or you have a hearing.”

In a 31-page ruling (pdf) dated Sept. 3, Sullivan dismissed McAbee’s new video and audio evidence, calling them “ambiguities” that the court “could not resolve.”

McAbee’s filing for reconsideration of bail cited audio evidence from Metropolitan Police Department officer Andrew Wyatt’s bodycam, which showed that McAbee didn’t assault Wyatt while he lay on the concrete steps, but assured him he would help him up.

“There is no evidence—it did not happen as admitted by the government—that Mr. McAbee assaulted Officer AW while Officer AW was in that vulnerable position,” attorney William Shipley wrote in the motion filed May 9.

Does Not Pose a Danger

“I do not believe that Mr. McAbee poses a future danger to the community if he were to be released between now and the time that he resolves this case,” Frensley said. “And the government, despite my request that they provide me any evidence that he’s presented any sort of a danger to the community, have been able to point to absolutely nothing beyond the events around and during January the 6th.”

Prosecutors immediately appealed and Judge Sullivan stayed Frensley’s order until Oct. 13, 2021, when he made an oral ruling that McAbee would remain jailed. Sullivan’s memorandum opinion on Dec. 21, 2021, said it would be impossible to guarantee the public’s safety without keeping McAbee behind bars.

Judge Sullivan disputed McAbee’s contention that the court “made its determination by pronouncing his factual guilt” and that the judge sidestepped “certain uncontroverted video evidence.”

Sarah McAbee said watching the video without the associated audio track could lead anyone to draw the wrong conclusion.

“The way the videos are portrayed, it looks very damning,” she said. “Until you get the audio and you look at the video for what it’s worth, you realize his feet never move from the position that he’s in when he’s protecting Wyatt. While you listen to him say, ‘Hey, I’m helping you.’ Then they get up together.”

Judge Sullivan said he made no conclusions about McAbee’s guilt or innocence in the case. However, during a hearing on Sept. 22, 2021, Sullivan suggested that McAbee is a terrorist.

“It appears clearly to this court that the defendant is pulling the officer back into the crowd of other terrorists,” Sullivan said, according to the official court transcript (pdf).

“You can’t call someone a terrorist on record and then say you aren’t biased,” Sarah McAbee said.

In his Sept. 3, ruling, Sullivan said there is “indisputable evidence” that McAbee committed “insurrection,” a crime neither he nor any other Jan. 6 defendant is charged with.

“Mr. McAbee’s text messages corroborate that he planned to and actually participated in the insurrection,” Sullivan wrote. In another section of the decision, Sullivan concluded that McAbee engaged in “physical and violent” behavior.

“As a law enforcement officer, he should understand the gravity and egregiousness of such conduct—but nevertheless, he chose to act in this manner,” the judge wrote. “It is no ‘Catch-22’ that the court takes seriously charges that someone tasked with enforcing the law has shirked that responsibility.”