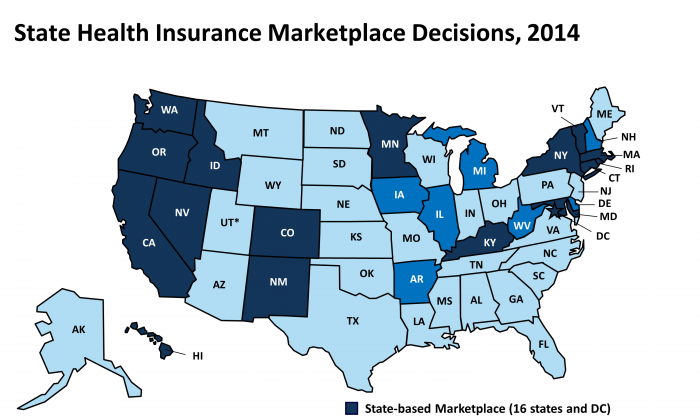 One ruling would kill the law, the other would keep it viable
By Mary Silver

A four-word phrase could mean life or death for the Affordable Care Act (ACA). A federal court in Washington Tuesday ruled that people can only get subsidies for their health insurance premiums if they bought health insurance on a state insurance exchange. The phrase is “established by the State.” The case is Halbig v Burwell.

If the decision is not overturned, it would derail the ACA. The issue may go to the Supreme Court. The law’s main purpose was to provide health insurance for nearly all of the uninsured. Premium subsidies and tax penalties are key to that goal.

House Speaker John Boehner, who has presided over multiple attempts to repeal the law, said in a statement the ruling proves the law is “completely unworkable.” The Ohio Republican stated, “It cannot be fixed.”

House Energy and Commerce Chairman Fred Upton (R-Mich.) and Energy and Commerce Subcommittee on Health Chairman Joe Pitts (R-Pa.) released a joint statement that called the Halbig ruling “a clear rebuke of the administration’s effort to extend subsidies where the law did not provide them.”

Upton and Pitts harshly criticized the administration. They wrote, “From the way the president’s health care law was forced through Congress to its reckless implementation, time and again the administration has acted outside the law, creating confusion, uncertainty, and ultimately harm for the American people.”

On the other side, House Democratic Whip Steny Hoyer was sure Congress intended for people in every state to be eligible for federal subsidies. He stated, “Whether one accesses insurance coverage through their state’s marketplace or through the one established by the federal government to serve those in states that chose not to set up marketplaces of their own, eligible enrollees ought to be able to receive a subsidy to help them afford coverage.”

Hoyer argued that it was clear that Congress meant for every state to get the subsidies, because the Congressional Budget Office based its cost estimates on that idea.

The plaintiffs in the case are mostly small businesses. Their complaint states that the federal government meant for the tax subsidies to be used as carrots or sticks. States would be rewarded if they set up state exchanges to sell health insurance. States would be punished if they did not set up exchanges. They would forfeit the federal dollars that otherwise would flow to state residents in the form of premium subsidies.

They also argued that Congress meant to absolve the federal government from the expense of providing subsidies. The complaint states, “A majority of states have declined to establish Exchanges. That choice has left the federal government with the burden of establishing Exchanges in those states, but without the burden of paying for premium-assistance subsidies to the residents of those states—just the balance that Congress struck.”

A majority of the judges in Washington agreed with the plaintiffs.

Their ruling, if it stands, will affect people in 27 states where the federal government is running the health marketplace exchanges.

On the same day, another federal appeals court issued a contradictory ruling on the key financing issue. Hoyer wrote, “The D.C. Circuit’s terrible decision comes on the same day as a more sound ruling by the Fourth Circuit Court of Appeals, which found that the subsidies are indeed permissible.”

About 100 miles to the south in Richmond, Va., the judges unanimously ruled that the Internal Revenue Service correctly interpreted the will of Congress when it issued regulations allowing consumers in all 50 states to purchase subsidized coverage.

The White House immediately declared that policyholders will keep getting financial aid as the administration sorts out the legal implications.

Spokesman Josh Earnest said the adverse decision in Washington would have “no practical impact” on tax credits as the case works its way through the courts.

Both cases are part of a long-running political and legal campaign to overturn Obama’s signature domestic legislation by Republicans and other opponents of the law.

In the Washington case, a group of small-business owners argued that the law authorizes subsidies only for people who buy insurance through markets established by the states—not by the federal government.

That’s no mere legal distinction, since the federal government is running the markets, or exchanges, in 27 states.

A divided court agreed with that objection, in a 2–1 decision that could ultimately mean premium increases for more than half the 8 million Americans who have purchased taxpayer-subsidized private insurance under the law.

Two judges appointed by Republican presidents voted against the administration’s interpretation of the law while one appointed by a Democratic president dissented.

The Obama spokesman said the administration would seek a hearing by the full 11-judge court. The full court has seven judges appointed by Democratic presidents, including four appointed by Obama.

The majority opinion concluded that the law, as written, “unambiguously” restricts subsides to consumers in exchanges established by a state. That would invalidate an Internal Revenue Service regulation that tried to sort out confusing wording in the law by concluding that Congress intended for consumers in all 50 states to have subsidized coverage.

“At least until states that wish to can set up exchanges, our ruling will likely have significant consequences both for the millions of individuals receiving tax credits through federal exchanges and for health insurance markets more broadly,” the majority wrote.

“But, high as those stakes are, the principle of legislative supremacy that guides us is higher still,” the opinion added.

“We believe that this decision is incorrect, inconsistent with congressional intent … and at odds with the goal of the law: to make health care affordable no matter where people live,” Pierce said in a statement.

The seemingly arcane issue is crucial to the success of the health care law because most states have been unable or unwilling to set up their own exchanges. The inaction stems in many instances from opposition by Republican governors to the Affordable Care Act.

Supporters of the act said the purpose of the tax credit was not to promote the establishment of state exchanges, but rather to achieve Congress’s fundamental purpose of making insurance affordable for all Americans.