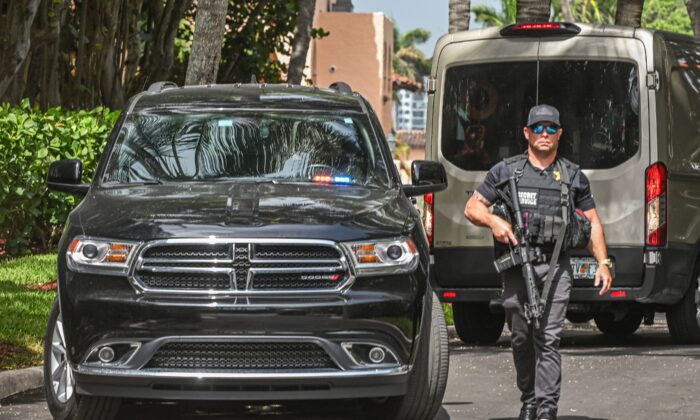 Judge Who Approved Trump Search Warrant Should Have Recused Himself: Former Prosecutors

The U.S. judge who approved the FBI’s search warrant on former President Donald Trump’s home should have recused himself from the case, some legal experts say.

“I think it probably would have been better had this magistrate judge not presided over this application,” David X. Sullivan, a trial lawyer and former assistant U.S. attorney, said on “Just the News, Not Noise” on Aug. 11.

U.S. District Judge Bruce Reinhart, who signed off on the warrant, recused himself from Trump’s lawsuit against former Secretary of State Hillary Clinton in June. Reinhart did not disclose the reason or reasons for the recusal.

Additionally, Reinhart posted on Facebook before Trump was sworn into office that Trump lacked moral stature.

“Clearly there’s a history there. And that’s something that a lot of people are so fractured in this country right now that it probably would have been better had this magistrate judge not signed the warrant,” Sullivan told Just the News.

At the same time, “I think another judge looking at this would say, ‘Well, I would have made the same finding,'” he added, so the lack of recusal may be a “harmless error.”

Kash Patel, another former federal prosecutor, and a current EpochTV host, told the John Solomon Reports podcast that Reinhart should have recused himself.

“Err on the side of caution when you are a judicial magistrate when you are deciding nationally important cases,” Patel said, adding that Trump’s legal team should consider moving to disqualify Reinhart over the Facebook comment.

Rep. Brian Mast (R-Fla.) highlighted how Reinhart had recused himself from the Trump-Clinton case, writing in a statement, “Everyone should be concerned about unbiased application of the law.”

Jenna Ellis, a lawyer who used to represent Trump, also said on Twitter that it was a “gargantuan mistake” that Reinhart didn’t follow his first recusal with a second one.

Still, not everybody agreed.

“Criticizing Trump 5 years ago doesn’t require recusal and neither does being woke, much less representing horrible clients,” Margot Cleveland, a former law clerk and a senior legal correspondent for The Federalist, wrote on Twitter, referring to Reinhart’s former representation of people connected to sex offender Jeffrey Epstein.

Reinhart may have recused from the Trump-Clinton case because of Clinton, not Trump, which would remove that factor from the case involving the warrant, she noted.

Magistrate judges are picked by other judges, rather than being appointed by a president like many federal judges are.