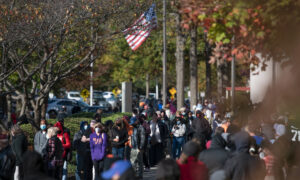 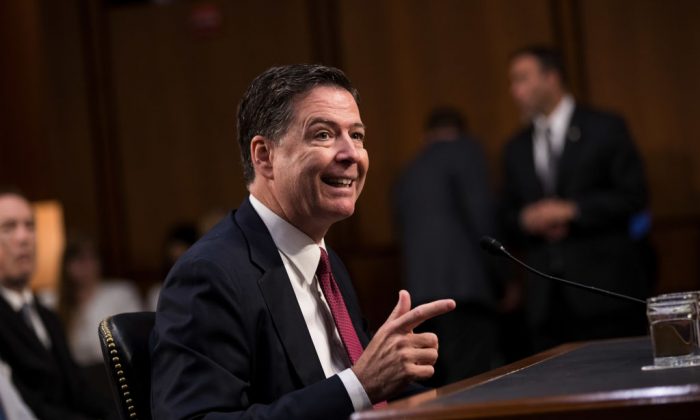 Judge to Rule on Challenge to Comey Subpoena on Monday

WASHINGTON—A federal judge indicated on Nov. 30 that he intends to issue a ruling on Monday, Dec. 3, on a legal challenge to a Congressional subpoena issued to former FBI Director James Comey.

During a hearing at the U.S. district court in Washington on Nov. 30, Judge Trevor McFadden asked the attorney for the U.S. House of Representatives if there was any reason he could not issue a ruling on Dec. 3. Thomas Hungar, the general counsel for the House, said no.

Comey’s deposition was postponed to Dec. 4 making way for a Dec. 3 hearing on his request to quash the subpoena.

Comey filed a pair of motions on Nov. 29, asking the court to block a subpoena issued to him by the House Judiciary Committee and to order a delay of his Dec. 3 House deposition pending a court decision. Comey alleged, in a court motion (pdf) filed by his attorney, that he will be subjected to “harassment” and “selective leaks” from the committee that would be used to “peddle a distorted, partisan political narrative.”

In a response (pdf) filed with the court, Hungar said that Comey’s allegations are “baseless” and called the request to quash the subpoena “so extraordinary and frivolous that, as far as undersigned counsel is aware, no district court in the history of the Republic has ever granted such a request.”

The Judiciary Committee issued subpoenas on Nov. 21 to Comey and former Attorney General Loretta Lynch. The committee is conducting a joint investigation with the House Committee on Oversight and Government Reform into actions taken by the FBI and Justice Department in 2016, particularly in relation to the investigation of Hillary Clinton’s use of an unauthorized private email server and allegations of collusion between associates of the Trump 2016 presidential campaign and Russia. Comey headed the FBI during both probes.

According to the court documents, the two committees have interviewed 16 witnesses and reviewed a large volume of documents before calling on Comey to testify. Hungar wrote that Comey’s testimony is now imperative so the committees can conclude their investigation and deliver a report to the public “within a few short weeks.”

Comey’s attorney, David Kelley, told the judge that his client keeps on getting brought before different committees to testify. Hungar responded that the last time Comey was brought before the Judiciary Committee was in September 2016 and called that argument “absurd.”

Hungar’s central defense for the subpoena revolved around a 1975 Supreme Court ruling in Eastland v. U.S. Servicemen’s Fund which found that the Constitution’s speech or debate clause “provides complete immunity … for issuance of this subpoena.”

Kelley said that he was not that familiar with the Eastland ruling and asked for time to be able to respond to the defense’s arguments, which he was granted. The court scheduled a Dec. 2 deadline for Kelley to file a response to Hungar’s defense.

In response to Comey’s assertion that his remarks in a closed-door deposition would be leaked and used out of context, Hungar pointed out that Comey, like all other witnesses in the investigation, was informed that he is free to discuss his testimony and will be provided with a transcript within 24 hours of his deposition.

House Judiciary Committee Chairman Bob Goodlatte told CNN on Nov. 30 that the public hearing format would not work because each lawmaker is allotted only five minutes to ask questions, which “does not suit the need of the public.”

“We’ve been trying to talk to Comey for months,” Goodlatte said. “We will release the transcripts. We’ve told Comey we’ll release this transcript the day after the hearing.”

Comey’s attorney told the court on Nov. 30 that the committee’s purpose in issuing the subpoena to Comey was not legislative.

“They want unfettered access to Comey” because “they just want to zero in and gang up,” Kelley said.

Hungar’s written response addressed this allegation, pointing to the 1975 Supreme Court ruling which states that “in determining the legitimacy of a congressional act,” the courts “do not look to the motives alleged to have prompted it.”

“If the mere allegation that a valid legislative act was undertaken for an unworthy purpose would lift the protection of the Clause, then the Clause simply would not provide the protection historically undergirding it,” the ruling stated.

According to the response filed by the House attorneys, no other witness in the investigation demanded that their deposition be public.

“Try as he might, Mr. Comey may not condition his cooperation with a congressional investigation on the presence of television cameras,” Hungar wrote.