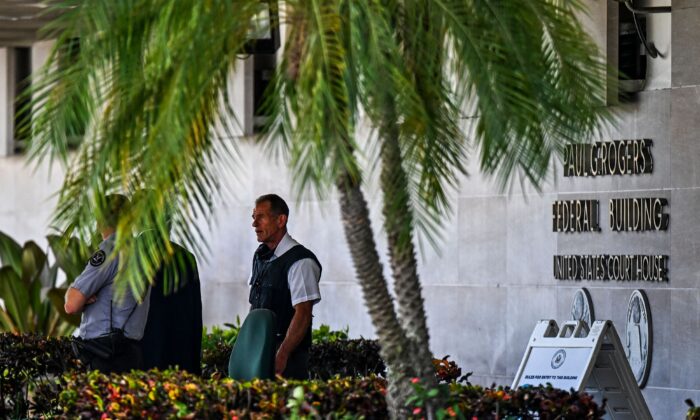 Jackson Elliott
Reporter
Jackson Elliott reports on small-town America for The Epoch Times. He learned to write and seek truth at Northwestern University. He believes that the most important actions are small and that as Dostoevsky says, everyone is responsible for everyone and for everything. When he isn’t writing, he enjoys running, reading, and spending time with friends. Contact Jackson by emailing jackson.elliott@epochtimes.us
View profile
Follow
and Zachary Stieber

WEST PALM BEACH, Fla.—A federal judge on Aug. 18 ordered government officials to give him a redacted version of a key document that led to the approval of the search warrant executed by FBI agents on former President Donald Trump’s home in Florida.

U.S. Magistrate Judge Bruce Reinhart will review the proposed redactions and decide if they are appropriate.

Reinhart heard from government lawyers, which oppose the release of the version of the affidavit, and attorneys representing media outlets, which are calling for the release of the document, during a hearing in federal court on Aug. 18.

Reinhart said during the hearing that there may be information in the affidavit that is so sensitive that he will decide if it should remain hidden from the public.

Affidavits are sworn statements commonly filed in court cases. In this case, the affidavit outlined reasons why Reinhart should approve a search warrant. Reinhart, who recently recused himself from a case involving Trump’s lawsuit against Hillary Clinton, approved the warrant on Aug. 5. He also approved the unsealing of the warrant and some related documents, after the government and Trump’s team aligned on supporting the release.

An inventory showed FBI agents seized classified records from Trump’s Mar-a-Lago resort, but Trump has said that he had declassified the records and asked the government for all of them back. Agents didn’t list taking passports, but apparently left with three, only to return them soon after Trump requested them back.

Jay Bratt, representing the government, offered the argument laid out in the government’s brief, which said that releasing the affidavit could undermine the investigation at hand, which was said to involve national security matters.

“In light of the heightened interest in this matter we took the unusual and really unprecedented step of seeking to unseal the warrant,” he said. “There is another public interest; that criminal investigations are capable of going forward. Releasing a search warrant affidavit in the middle of an ongoing investigation is a compelling interest.”

The investigation in question is in its “opening stages,” according to Bratt.

Reinhart mused that he is in “a bit of a catch-22” because to support the affidavit not being unsealed, the information it contains must be discussed.

“There are things that you know and I know that the media don’t know,” Reinhart said, adding that he can consider the nonpublic information.

Bratt outlined concerns that disclosing the affidavit could assist “amateur sleuths on the internet” in figuring out the identities of FBI agents involved in the case, noting that agents have received threats. That could “chill other witnesses” and imperil their safety, Bratt said.

The government lawyer also said that because so much information in the document needs redaction, it would leave “very little—nothing of substance.”

“What’s the harm to the government if I redacted everything but the first word on the first page?” Reinhart asked.

That would only serve to burden the government, and wouldn’t serve the media, Bratt replied.

Reinhart said he was thinking of sections at the beginning of the warrant that could be unsealed, but Bratt said those wouldn’t “edify the public in any meaningful way.”

Chuck Tobin, representing the media, said the government is wrongly opposing the release of even a redacted version of the affidavit.

The public interest is “powerful” and “unprecedented” in light of the raid of a former president, Tobin said.

“The raid on Mar-a-Lago by the FBI is one of the most significant law enforcement events in the nation’s history,” Tobin said.

Even if it’s difficult for the government to go through the affidavit and redact it, that’s the government’s job, he added, acknowledging that there likely is going to be information that the government is able to justify redacting.

That’s when Reinhart said some information in the document may be so sensitive that the court sides with the government in shielding it from the public.

“You are standing in for the public, your honor,” Tobin said.

Media companies noted in a brief that a slew of stories about the raid have cited anonymous sources in reporting alleged nonpublic information, but news reports may not necessarily be true, Reinhart said.

James Moon, representing Judicial Watch, the first party to ask to unseal the search warrant materials, said the raid “is not business as usual and should not be treated as such.”

“We unfortunately have to put all of our trust in you,” he told Reinhart, referring to the possible release of the affidavit.

“In this void of information, it will easily be filled by people who will give you whatever answer they want,” Moon said, adding that it would help people view the justice system as fair.

“Once I start to go down the road of is this fact public or not, it’s a dangerous spiral,” Reinhart said.

He said that all of the information he viewed before approving the warrant is in the affidavit.

“I am inclined to say I am not going to seal the entire affidavit,” he said.

“I find that on the present record the Government has not met its burden of showing that the entire affidavit should remain sealed,” Reinhart said in a written order.

Christina Bobb, an attorney for Trump, was present in the courtroom but did not speak. Trump’s counsel has not entered any filings in the case. Trump’s team has called for the release of the unredacted affidavit.

“Today, magistrate Judge Reinhard rejected the DOJ’s cynical attempt to hide the whole affidavit from Americans,” Trump spokesman Taylor Budowich said in a statement. “However, no redactions should be necessary and the whole affidavit should be released, given the Democrats’ penchant for using redactions to hide government corruption, just like they did with the Russia hoax.”

Media outlets and other parties could then appeal the redactions, following the release of the copy.

If Reinhart doesn’t agree, he will strike some redactions. But he will keep the document under seal so the government can appeal the strikes he’s made.

It will take weeks before the matter is ironed out, according to Deanna Shullman, another lawyer representing the outlets.