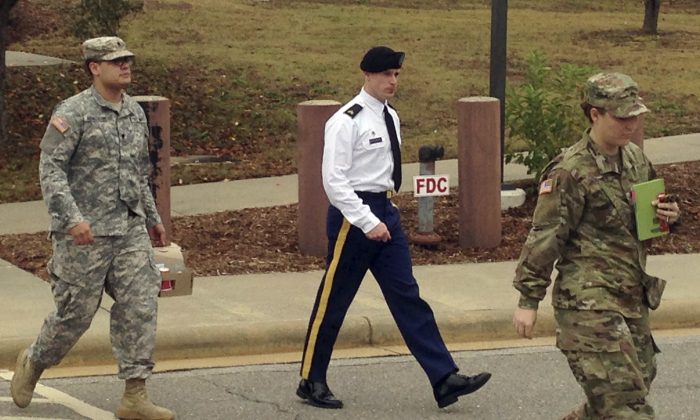 Army Sgt. Bowe Bergdahl is seen leaving a courtroom after a pretrial hearing in Fort Bragg, NC., Monday, Nov. 14, 2016. Bergdahl faces a military trial in 2017 on charges of desertion and misbehavior before the enemy after walking off his post in Afghanistan in 2009. (AP Photo/Jonathan Drew)
Crime and Incidents

FORT BRAGG, N.C.—A judge will hear more arguments Tuesday about whether injuries to soldiers on a search mission should be allowed as evidence that U.S. Army Sgt. Bowe Bergdahl endangered comrades by walking off his post in Afghanistan.

On Monday, the judge, Army. Col. Jeffery Nance, also agreed to delay Bergdahl’s trial by several months until May 15, 2017. Prosecutors asked for the delay because of the slow pace at which they’re getting approval to turn over classified evidence.

Prosecutors are arguing that two wounded soldiers’ injuries should be allowed as evidence to show that Bergdahl’s disappearance effectively put other military members in harm’s way.

Bergdahl is charged with desertion and misbehavior before the enemy, the latter of which carries a maximum penalty of life in prison.

U.S. Air Force Maj. John Marx testified about a firefight that occurred after he and several others joined about 50 members of the Afghan National Army on a search for Bergdahl. They were attacked by enemy fighters after setting up a checkpoint near a town in Afghanistan on July 8, 2009.

Marx testified about fighting alongside U.S. Army National Guard Sgt. 1st Class Mark Allen, who was shot in the head during the firefight. Prosecutors said Allen suffered a traumatic brain injury that has left him in a wheelchair and unable to communicate. Another soldier had hand injuries and required surgery because of a rocket-propelled grenade.

Marx, who said the mission’s sole purpose was to search for Bergdahl, testified that he was next to Allen as bullets flew around them.

“I looked at him, then I see a trickle of blood coming down his head,” Marx testified. Asked where Allen was wounded, Marx pointed at his temples and said: “Right through his head.”

Bergdahl, dressed in a white shirt and blue pants, appeared stoic as he listened.

Marx and two others involved in the firefight said they came from another part of Afghanistan to take part in a hastily planned search mission. They had been embedded with Afghan soldiers to help train them.

Prosecutors have said evidence of the injuries will help them show that Bergdahl endangered his comrades, one of the elements of the misbehavior before the enemy charge.

Defense attorneys have argued that Bergdahl was not responsible for the injuries, writing in a motion earlier this year that: “Allen’s injuries were directly caused by the Taliban, not by SGT Bergdahl.”

After at least one more witness Tuesday, both sides are set to finish their arguments on the matter.

Bergdahl, who’s from Hailey, Idaho, walked off his post in Afghanistan in 2009 and was held captive by the Taliban and its allies for five years. He has said he wanted to cause an alarm and draw attention to what he saw as problems with his unit. The Obama administration’s decision to swap prisoners for his return was heavily criticized by some Republicans.