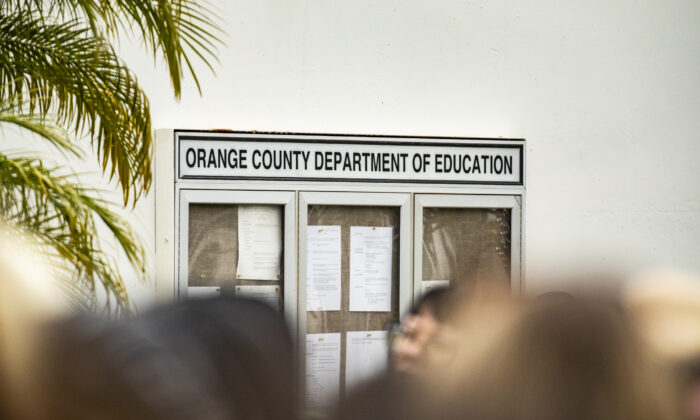 SANTA ANA, Calif.—A judge is settling an ongoing dispute between Orange County’s education officials regarding who has the authority to determine local school districts’ election boundaries for the primary election in June.

The Orange County Board of Education, the Orange County Committee on School Districts, and the Orange County Registrar’s office appeared in front of Judge Gregory Lewis on Feb. 15 to settle which agency—the board or the committee—has the power to decide which voting map to use for the June 2022 election, where the board’s next group of trustees will be elected.

The hearing came after the county Board of Supervisors granted the Board of Education trustees autonomy over the map on Feb. 1, instead of the 11 appointed members of the committee—the group in charge of approving and submitting the final district maps.

According to the Orange County Department of Education website, the committee was created in each county by the state legislator to make “recommendations” on the organization of school districts, changes in the school district boundaries, the number of Board of Education trustees, and the manner they are elected.

However, how much authority the committee specifically has over the education board’s redistricting through recommendations has been at the center of the dispute.

Despite the decision made by the supervisors, the registrar of voters Neal Kelley told the board trustees on Feb. 1 that only the committee can submit a map and that the map could not be accepted without a court order.

The decision concluded by the judge will determine if the codes are effective or not.

The Feb. 15 hearing occurs weeks after the Board of Education filed a lawsuit on Jan. 21 accusing the committee of redoing the entire voting map the board submitted on Dec. 8—as opposed to making adjustments by the Dec. 15 deadline.

While the committee is responsible for submitting the final map to the registrar’s office, this year the committee completely changed the district boundaries, in a way that would kick the board trustees out of their current districts and make them compete with one another during re-election periods, according to Board of Education Trustee Mari Barke.

The Board of Education is a conservative board, Barke told The Epoch Times in a previous interview. The trustees have been outspoken against K–12 COVID-19 mandates, Critical Race Theory, and have filed multiple lawsuits against Gov. Gavin Newsom challenging his emergency powers.

“This year, for the first time, the county committee hijacked the process and took it over,” said Brenner, the board’s attorney. “It put the board’s process which was over a seven-month period away and it did so in a highly partisan manner.”

Brenner said the matter is “both a straightforward … and an urgent one.”

“Straightforward because it’s a matter of a dispute between two agencies, an elected body, the board of education, and the unelected, unaccountable to the voters, county committee on school district organization,” Brenner said.

In response to Brenner’s argument that the committee was “partisan” and is “not elected,” Jeffrey Riel, an advisor on the committee, said the committee is backed by the state and comprised of appointed individuals by the local school boards.

As the urgency to officially decide on a voting map lingers, Judge Gregory Lewis adjourned the hearing until further notice to allow time for carefully analyzing the case.

“This is not a quick shot,” Lewis said. “It’s going to take a lot of thought.”

A date to determine the ruling has not been set.