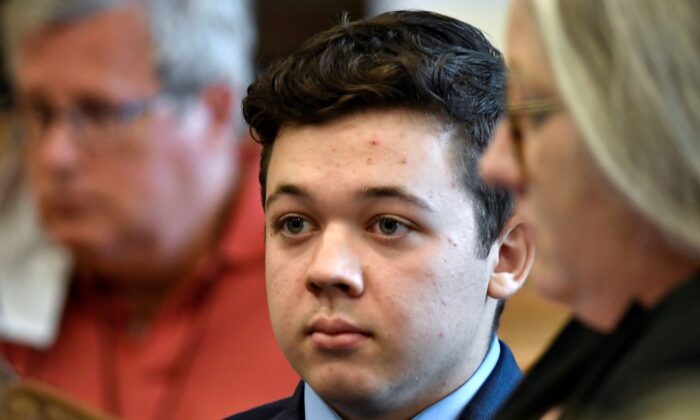 Kyle Rittenhouse appears in court for a motion hearing in Kenosha, Wis., on Sept. 17, 2021. (Sean Krajacic/The Kenosha News via AP)
US News

A Wisconsin judge has ruled that the men allegedly shot by Kyle Rittenhouse can be referred to as “rioters,” but not as “victims” at the upcoming high-profile trial.

Rittenhouse had volunteered to provide security for an area business, following violent demonstrations the previous night in the neighborhood. He served as one of many local individuals who stepped up to provide armed security in the wake of violence in the community.

Kenosha County Circuit Judge Bruce Schroeder presided over the hearing prior to the case going to trial on Nov. 1. He issued the ruling after prosecutors argued that Rittenhouse’s lawyers should be banned from using “pejorative terms” to describe the men who were shot during the trial.

Schroeder ruled against allowing the term “victims” from being used to refer to the three men. He instead ruled to allow the words “rioters,” “looters,” or “arsonists,” if evidence can be provided to support their usage.

A video of Rittenhouse from the night of the event appeared to show that police didn’t act as if he had acted recklessly. Rittenhouse talked with police, explaining what had taken place during the shooting. The judge decided to allow the video as evidence in the upcoming trial.

Controversy is likely to run high, as the weapon involved was an AR-15 rifle and Rittenhouse was 17 years old at the time of the shooting. Gun control advocates have often claimed that the AR-15 is a concerning weapon.

The case may also capture the attention of the nation because it involved a Black Lives Matter demonstration and took place in the aftermath of the controversial police shooting of a black man. The case of former Minneapolis police officer Derek Chauvin was nationally televised, with protests held nationwide, following the death of George Floyd, a black man.

Many gun rights activists have supported Rittenhouse since the shootings, considering him a patriot and raising $2 million for his bail.

A police chief in Illinois confirmed to The Epoch Times that the teen was part of the agency’s youth police cadet program. Rittenhouse has posted pro-police messaging on social media.

Video footage appears to show the teen shooting three people in Kenosha. While some say that he’s at fault, others have argued that he was acting in self-defense.

Attorney Lin Wood said he connected with the teen’s family and told them that “help is on the way.”