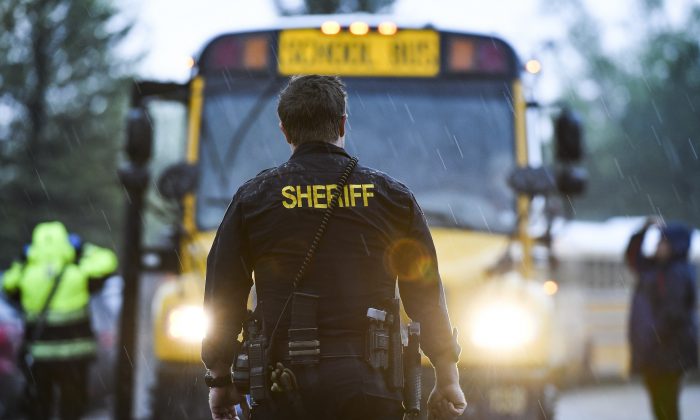 Judge Throws Out Suit Against Sheriff Over Immigration Detentions

An illegal alien’s class-action lawsuit, in which he claimed a Virginia sheriff violated his constitutional rights by detaining him at the request of U.S. Immigration and Customs Enforcement (ICE), has been thrown out by a federal judge.

“I am pleased that this lawsuit seeking preferential treatment for criminal illegal aliens within our justice system has been dismissed,” Jenkins said.

“This judge confirmed what people with common sense have known all along—my actions as sheriff, in cooperating with federal law enforcement authorities on illegal immigration, are completely legal and constitutional. Those arguing otherwise are out of touch with the concerns of our entire community and country. Spending time and money helping repeated lawbreakers escape the rightful actions of law enforcement is incomprehensible.

“I appreciate the enormous outpouring of support from our community as I pushed back against these attacks. I will always stand firm on this and other constitutional issues while protecting our community,” he added.

The case itself goes back two years.

Francisco Guardado Rios was arrested Aug. 13, 2017, for two misdemeanor offenses under Virginia law: driving without a license and contributing to the delinquency of a minor.

The foreign national was placed in the custody of the local jail, which is managed by Jenkins. The same day, ICE delivered documents requesting Rios be held beyond any scheduled time of release for 48 hours, because it had determined there was probable cause to believe Rios was an alien deportable from the United States under the Immigration and Nationality Act (INA).

The state court ultimately convicted Rios and sentenced him to 30 days in jail, with 20 days of the sentence suspended. Because he had been jailed 10 days, the state court ordered his immediate release, with credit for time served.

But because ICE had filed continued detention paperwork, Rios was held at the jail another two days and then transferred to the custody of ICE on Nov. 9, 2017, on civil immigration charges. Rios claimed in his lawsuit that almost 100 individuals, including himself, had been held past their release dates in the preceding two years because ICE requested it.

During the time period in question, Jenkins’s jail didn’t have a formal cooperation agreement with ICE, but on April 24, 2018, the institution formally entered into one under section 287(g) of the INA.

According to ICE, the U.S. Immigration and Customs Enforcement 287(g) program “enhances the safety and security of communities by creating partnerships with state and local law enforcement agencies to identify and remove aliens who are amenable to removal from the United States.”

The sheriff’s office is one of only two law enforcement agencies in Virginia to sign a 287(g) agreement with ICE. The other is the Prince William-Manassas Regional Adult Detention Center.

U.S. District Judge Glen E. Conrad of the Western District of Virginia ruled in Rios v. Jenkins that the sheriff had followed the law.

Although Rios was arrested for committing a local crime, as opposed to an immigration violation, ICE had properly directed the sheriff to detain him, Conrad found, adding that no federal court of appeals has “held that it would violate the Fourth Amendment to comply with an ICE detainer and administrative warrant.”

Attorneys for Rios had contended the county couldn’t detain him for ICE because it had no written agreement with ICE under 287(g). But the judge rejected that argument finding “local law enforcement officials may cooperate with ICE in the detention or removal of aliens not lawfully present in the United States … when such cooperation is expressly ‘[requested]’ or authorized by ICE.”