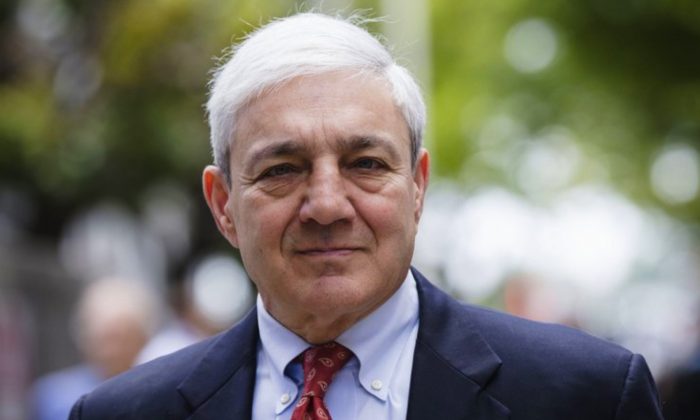 HARRISBURG—A federal judge threw out former Penn State President Graham Spanier’s misdemeanor child-endangerment conviction on April 30, less than a day before he was due to turn himself in to begin serving a jail sentence.

The decision by U.S. Magistrate Judge Karoline Mehalchick in Scranton, Pennsylvania, gave state prosecutors three months to retry Spanier under the state’s 1995 child endangerment law, the version in place in 2001.

Joe Grace, a spokesman for the attorney general’s office, said the decision was under review. Spanier’s defense lawyer, Sam Silver, declined to comment.

Mehalchick agreed with Spanier that he was improperly charged under a 2007 law for actions that occurred in 2001, when he was responding to a complaint about former assistant football coach Jerry Sandusky showering with a boy on campus.

“Spanier submits that this retroactive application is unreasonable and far more extensive than anyone in 2001 would have been able to reasonably foresee,” Mehalchick wrote. “The court agrees.”

Spanier had been due to report to jail early Wednesday to begin serving a minimum sentence of two months, followed by two months of house arrest.

Spanier, 70, was forced out as Penn State president shortly after Sandusky was arrested in 2011 on child molestation charges. A year later, Spanier was accused of a criminal cover-up, although many of those charges were dismissed by an appeals court. The jury acquitted him of what remained by the time of his trial, except for the single count of child endangerment.

Spanier’s lawyers argued that the application of the law to acts that occurred years before the measure was passed violated the state and federal constitutions’ ban on retroactive application of criminal laws. The child endangerment revisions in 2007 applied the law to those “employing or supervising” people who were responsible for the welfare of a minor child.

But the judge did not agree with their argument that the statute of limitations had been improperly applied.

Prosecutors had argued the 1995 and 2007 versions of the law encompassed and criminalized the same conduct.

Spanier was convicted for how he and two of his top aides decided to respond to a report from graduate assistant coach Mike McQueary that he had seen Sandusky abusing the boy late on a Friday night in a team shower.

Spanier has said the abuse of the boy, who has never been conclusively identified, was characterized to him as horseplay.

Spanier and two of his top lieutenants, former athletic director Tim Curley and former vice president Gary Schultz, agreed to notify The Second Mile, the charity for at-risk youth where Sandusky met many of his victims, but not to call the police.

Spanier gave his approval to his deputies in an email, warning that “the only downside for us is if the message isn’t ‘heard’ and acted upon, and we then become vulnerable for not having reported it.”

Curley and Schultz were also charged criminally for their actions regarding Sandusky, but on the eve of trial, they both pleaded guilty to misdemeanor child endangerment and testified for the prosecution. Both have since served similar jail sentences.

Spanier did not testify at his trial and told the judge at sentencing that he regretted not intervening more forcefully.

Sandusky is doing 30 to 60 years in state prison and recently won an order for a new sentence.