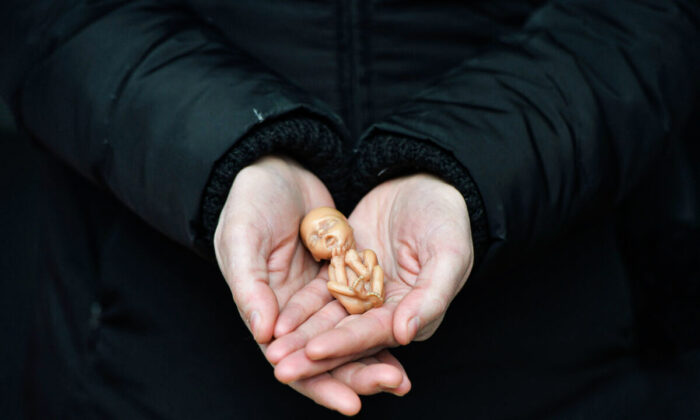 A pro-life campaigner displays a plastic doll representing a 12-week-old fetus as she stands outside the Marie Stopes Clinic in Belfast, Northern Ireland, on April 7, 2016. (Charles McQuillan/Getty Images)
US News

A judge on Wednesday temporarily blocked Ohio from enforcing its heartbeat abortion ban for 14 days amid legal actions. The state’s oldest pro-life group decried the ruling and vowed “Ohio will become abortion free.”

In granting the temporary stay, Jenkins noted that the Ohio Constitution provides substantive and procedural due process rights under Article I Section 16.

“No great stretch is required to find that Ohio law recognizes a fundamental right to privacy, procreation, bodily integrity, and freedom of choice in health care decision making,” Jenkins wrote in the ruling (pdf).

Ohio Right to Life, the state’s oldest and largest grassroots pro-life organziation, decried the ruling and promised to have it overturned.

The group said that the restraining order will allow providers in the state to continue performing abortions up to 20 weeks gestation.

“By forum shopping, abortion activists temporarily got what they wanted which is the ability to abort children with a beating heart,” said Ohio Right to Life President Michael Gonidakis in a statement.

“Nowhere in the Ohio Constitution or anywhere in the Ohio Revised Code will any Ohioan find supporting evidence that Ohio’s current heartbeat law is anything other than good law which saves lives.”

The clause states, in part, that no “law or rule shall prohibit the purchase or sale of health care” nor “impose a penalty or fine” for the same.

Jenkin’s ruling noted that “as a result of the HCFA, the Ohio Constitution contains a direct recognition of the fundamental nature of the right to freedom in health care decisions.”

The amendment, which Ohioans voted for in a 2011 referendum, doesn’t define “health care,” but Jenkins said that abortion “clearly constitutes health care within the ordinary meaning of that term.”

“Accordingly, this Court recognizes a fundamental right to abortion under Ohio’s Constitution,” the judge ruled.

However, he noted that “there is limited caselaw directly addressing whether the Ohio Constitution and its unique language protect the right to abortion.”

Jenkins also ruled that the law discriminates against pregnant women in violation of the state constitution’s Equal Protection and Benefit Clause.

Gonidakis said Ohio Right to Life is “more than confident” that Ohio’s heartbeat law will go back into effect soon.

“Further, we can assure pro-life Ohio that in the near future Ohio will become abortion free, regardless of what this local judge ruled today. We will prevail,” he said.

The law sought to ban abortion after a fetal heartbeat is detected, but includes exceptions for medical emergencies or medical necessities. The law does not include exception for rape or incest.

A fetal heartbeat can be detected as early as six weeks into the pregnancy, before many women may be aware they are pregnant.

Physicians could face fines up to $20,000 and loss of their medical licenses if they violate the law.

In his ruling, Jenkins noted that physicians who perform abortions after a fetal heartbeat is detected must place a document in the patient’s file declaring an abortion necessary. But because the physician’s judgement may be second guessed, they may be open to prosecution for a fifth-degree felony, punishable by up to one year in prison, as well as loss of licensure, civil forfeiture, and civil liability.

This effectively bans abortion in Ohio, the judge noted.