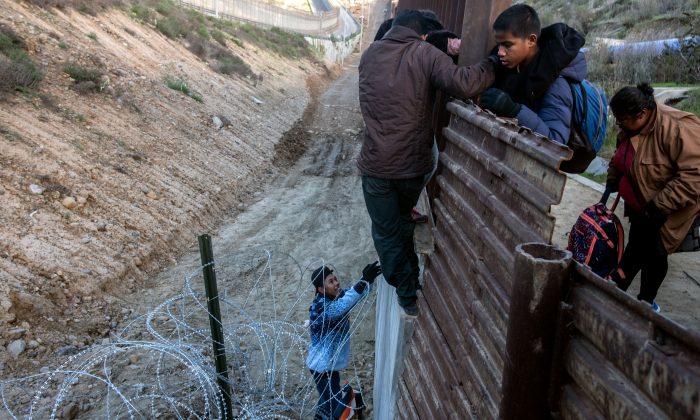 A federal judge in Kansas who formerly worked for an open-borders group and whose sister currently heads one of the nation’s leading open-borders groups has struck down a federal law that prevents people from “encouraging” or “inducing” illegal immigration, finding that the measure unconstitutionally infringes First Amendment free speech protections.

The jurist in this case is Judge Carlos Murguia of the U.S. District Court of Kansas, who was appointed to the bench by former President Bill Clinton in 1999.

The judge’s online biography acknowledges he previously worked as “the immigration coordinator for El Centro Inc.” El Centro Inc. is a left-wing activist nonprofit based in Kansas City, Kansas, that identifies UnidosUS as an affiliate on its website. UnidosUS is the new name for the National Council of La Raza (“La Raza” is Spanish for “the race”), a large organization headed by the judge’s sister, Janet Murguia.

On Aug. 21, Murguia threw out the convictions of two illegal aliens from Mexico, Jose Felipe Hernandez-Calvillo and Mauro Papalotzi, whom a jury convicted in August 2018 of conspiring to encourage illegal aliens to remain in the U.S. through employment at a drywall company in Lawrence, Kansas, called Plaster Masters, KCUR-FM reports. The company and its principal owner, Keith L. Countess, also were indicted for violating the law. Countess received probation in 2017 after pleading guilty to a reduced misdemeanor charge.

The law was enacted in 1952 and amended several times since, but similar laws have been on the books since the late 1800s. The statute, known as the Immigration and Nationality Act, provides for as much as five years in prison for anyone who “encourages or induces an alien to come to, enter, or reside in the United States, knowing or in reckless disregard of the fact that such coming to, entry, or residence is or will be in violation of law.” Another five years imprisonment may be added to the sentence if the defendant acted “for the purpose of commercial advantage or private financial gain.”

KCUR-FM reported that the lawyer for Hernandez-Calvillo, Tom Bradshaw, argued in court that a First Amendment issue was at stake and that “the government was using this [law] to charge people who did nothing more than make a job available to an undocumented person, whether or not they had direct knowledge that the person was undocumented.”

“The statute requires that when you ‘encourage’ or ‘induce,’ you know the person was here illegally. But the government has played loose with that,” Bradshaw said.

Judge Murguia reportedly determined that the federal law runs afoul of the First Amendment because it has the effect of criminalizing protected speech. From the bench, he cited a similar case from the 9th U.S. Circuit Court of Appeals in San Francisco, which found the same statute violated the First Amendment. In that case, the appeals court declared the law “unconstitutionally overbroad” because it “criminalizes a substantial amount of protected expression.”

Although 9th Circuit rulings aren’t binding precedent on federal judges in Kansas, which falls within the jurisdiction of the 10th U.S. Circuit Court of Appeals, Murguia said he accepted the reasoning contained in that ruling.

“The court adopts [the 9th Circuit’s] analysis in full and agrees that [the law] on its face is overbroad under the First Amendment,” Murguia said.

A copy of the order of dismissal signed by Judge Murguia in the case was obtained by The Epoch Times. The single-page document doesn’t explain the reasoning behind dismissing the cases against the two men.

The ruling is “ridiculous,” he wrote, “because the law clearly refers to engaging in subversive and fraudulent activities to encourage or enable actual individual aliens to remain in the country, not mere political advocacy for liberal immigration policies in the abstract. It’s like saying that someone who hates high taxes or gun control laws and advocates against them is the same as a person who actively assists tax cheats and gun felons in achieving the end goal of the criminalized behavior.”

Other circuits regard the law as legitimate, he noted.

The judge should have recused himself from the case, Horowitz wrote. He noted that Murguia’s sister, Mary Murguia, is a judge in the 9th Circuit who, at one time, recused herself from a trial involving pro-enforcement Sheriff Joe Arpaio of Maricopa County, Arizona, because her sister was president of La Raza.