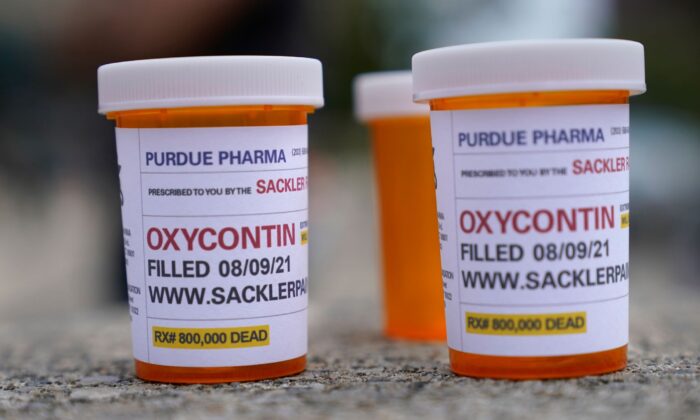 Fake pill bottles with messages about OxyContin maker Purdue Pharma are displayed during a protest outside the courthouse where the bankruptcy of the company is taking place in White Plains, N.Y., on Aug. 9, 2021. (Seth Wenig/File/AP Photo)
US News

A federal bankruptcy judge is expected to rule Wednesday on whether to accept a settlement between OxyContin maker Purdue Pharma, the states and thousands of local governments over an opioid crisis that has killed a half-million Americans over the last two decades.

If Judge Robert Drain confirms the plan, estimated to be valued at $10 billion, it could cap years of litigation. Members of the Sackler family would give up ownership of the company and pay $4.5 billion while the company is converted to a new entity with its profits being used to fight the epidemic. Objectors could appeal the ruling.

The next steps become murkier if the judge sides with a handful of holdout states and activists by rejecting the plan. Parties in the case could head back to the drawing board, and long-paused lawsuits against the company and Sackler family members would likely resume.

The most contentious issue in the settlement process is that Sackler family members would receive protection from lawsuits over opioids. They would not receive immunity from criminal charges, though there are no indications any are forthcoming.

The Stamford, Connecticut-based company would become a new entity with its board of directors appointed by government officials. Its profits, along with money from the Sacklers, would be used to fund treatment and education programs, among other efforts, as well as compensate some victims of the crisis. Those who are eligible would be expected to receive payments from $3,500 to $48,000.

Under the settlement, public officials would appoint members of the board of the new company that would replace Purdue.

State and local governments came to support the plan overwhelmingly, though many did so grudgingly, as did groups representing those harmed by prescription opioids.

Nine states, Washington, D.C., Seattle, and the U.S. Bankruptcy Trustee, which seeks to protect the nation’s bankruptcy system, opposed the settlement, largely because of the protections granted to the Sackler family.

Drain has urged the holdouts to negotiate an agreement, warning that drawn-out litigation would delay getting settlement money to victims and the programs needed to address the epidemic. Opioid-linked deaths in the United States continued at a record pace last year, hitting 70,000.