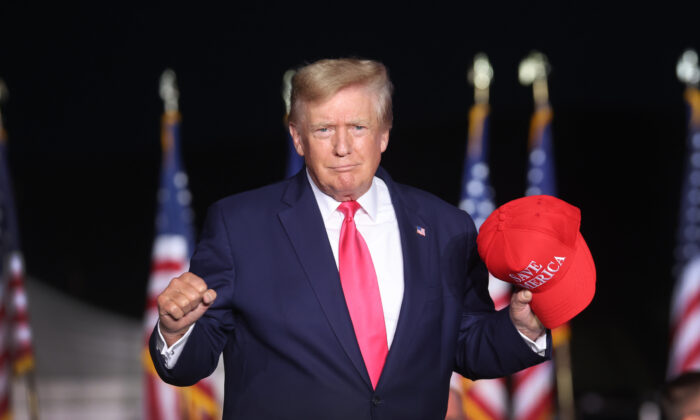 Former President Donald Trump and the Justice Department (DOJ) have each submitted two candidates to serve as an independent special master to review documents the FBI seized from the former president’s Mar-a-Lago residence last month.

The four candidates for the position were revealed on Sept. 9 in an eight-page filing (pdf) with the U.S. District Court for the Southern District of Florida. According to the court filing, Trump’s legal team and the DOJ will “advise the Court about their respective positions on the other party’s proposed candidates” on Sept. 12.

U.S. District Judge Aileen Cannon on Sept. 5 granted Trump’s request to have a special master independently review seized documents that may be protected by attorney-client or executive privilege. Days later, The DOJ filed an appeal against the judge’s order, arguing that doing so would place “irreparable harm” to U.S. national security.

Aside from the question of who will serve as special master, Trump’s legal team and the DOJ are apart on the scope of duties the individual would have. Lawyers for Trump want the special master to review “all seized materials, including documents with classification markings,” but the DOJ said it does not believe the individual should be permitted to review any classified records or consider potential claims of executive privilege.

The four candidates that Trump and the DOJ have proposed as potential special masters are as follows.

The first of two Trump’s choices is Raymond J. Dearie, who began his federal judicial service in 1986, the year he was nominated by then-President Ronald Regan and confirmed by the Senate to be a U.S. district judge for the Eastern District of New York.

Beginning in 2007, he became the court’s chief judge, a position he held until 2011. That year, he also assumed senior status on the court, allowing him to handle a reduced caseload in a semi-retired state.

Later, Dearie served on the Foreign Intelligence Surveillance Court (FISA) from 2012 to 2019. The FISA court reviews applications submitted by the U.S. government for approval of electronic surveillance, physical research, and other activities for foreign intelligence purposes.

Trump’s second pick is Paul Huck Jr., who is the founder of the Huck Law firm and former partner at the multinational law firm Jones Day, according to the court filing.

Previously, Huck served as Florida deputy attorney general from 2003 to 2007, during the time when Charlie Crist was the state’s attorney general. At that time, he was involved in overseeing the prosecution of cases involving health care, telecommunications, and pharmaceutical industries, according to his webpage on The Federalist Society.

From 2007 to 2008, Huck served as general counsel to Crist, a Republican at the time and the governor of Florida. During the two-year span, he was the top legal advisor to Crist on constitutional, legislative, and statutory issues involving the executive branch.

The DOJ chose Barbara S. Jones, a retired federal judge of the U.S. District Court for the Southern District of New York. She was nominated to the post by then-President Bill Clinton in 1995.

As a U.S. judge from 1995 until 2012 Jones presided over a wide range of cases, including accounting and securities fraud, antitrust, fraud and corruption, labor racketeering, and terrorism.

She retired in 2013 after 17 years on the bench. Currently, she is a partner for Bracewell LLP, where she focuses on “corporate monitorships, compliance issues, internal investigations and arbitrations, and mediations,” according to her webpage with the law firm.

Before becoming a judge, she was the first assistant to Robert Morgenthau, then-district attorney of New York County, for several years.

In 2018, Jones was a special master to review documents seized from Michael Cohen, Trump’s former attorney. In 2021, she took on the same role to review materials seized for two different cases—former New York City mayor Rudy Giuliani and Project Veritas.

Thomas Griffith, who is the DOJ’s other pick, served on the U.S. Court of Appeals for the District of Columbia Circuit from 2005 to 2020, after he was nominated to the position by then-President George W. Bush.

Before his judicial career, Griffith served as legal counsel for the Senate from 1995 to 1999. For the next five years, he was general counsel to Brigham Young University in Utah.

In April 2021, President Joe Biden appointed Griffith to a presidential commission tasked with exploring reforms to the Supreme Court. At the time, the creation of the commission drew criticism from GOP lawmakers, with Senate Minority Leader Mitch McConnell (R-Ky.) saying it was “a direct assault on our nation’s independent judiciary.”

Currently, Griffith is a special counsel at Hunton Andrews Kurth LLP and a lecturer of law at Harvard University.