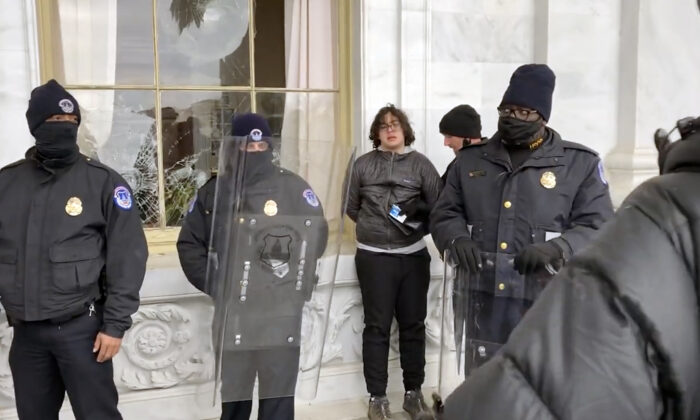 Hunter Ehmke, 21, is detained by police after smashing windows at the U.S. Capitol on Jan. 6, 2021. (©Bobby Powell, Truth is Viral/Screenshot via The Epoch Times)
Judiciary

A California man tackled by police as he was smashing windows at the U.S. Capitol on Jan. 6, 2021, was sentenced to four months in jail on May 13 by U.S. District Judge Tanya Chutkan in Washington.

Hunter Allen Ehmke, 21, of Glendora, California, was sentenced on one felony count of destruction of government property.

Chutkan, a 2014 appointee of President Barack Obama, also ordered Ehmke to pay the $2,821 cost of the multi-pane window and serve three years of supervised release.

According to prosecutors, Ehmke approached a window adjacent to the giant Columbus Doors at about 2:15 p.m. on Jan. 6. He climbed onto the window sill and kicked several panes. He then punched two additional panes, knocking one inside the building.

Police guarding the Rotunda doors raced to the window, knocked Ehmke from his perch, and tackled him. He was handcuffed as eight police officers surrounded him and ordered hostile bystanders to stay back.

Police took Ehmke’s driver’s license and ordered him to leave Capitol property; he was told a warrant would be issued for his arrest. He was arrested in California on Jan. 13, 2021, and was indicted on four charges on Jan. 27, 2021.

Ehmke accepted a plea agreement on Jan. 14, 2022, for felony destruction of property, a charge that carries a maximum penalty of 10 years in prison and a $250,000 fine.

“Though Ehmke did not enter the Capitol and did leave when directed to do so by police, his destructive acts at the front of the mob contributed to the overall violence and events of Jan. 6,” U.S. Department of Justice attorney Anne Veldhuis wrote in a 21-page sentencing memorandum.

“His actions show an overall willingness to engage in destructive conduct and to incite others.”

Ehmke’s attorney, Cara Halverson, argued that probation and restitution for the damaged window would be an appropriate punishment.

“Though his conduct was indeed serious, it cannot be conflated with the many other, wider failures that occurred that day,” Halverson wrote in a 26-page sentencing memorandum.

“And it should not be used as a proxy for those, including the former president, the rally’s organizers and speakers, and other nefarious, organized groups, that arguably bear much greater responsibility for what happened on Jan. 6.”

Large sections of Ehmke’s sentencing memo are redacted because the information was filed under a court seal. The public portions talk about him overcoming the use of marijuana and psychedelic drugs.

He has been drug-free since November 2020 and now attends community college full-time. His mother spoke at the sentencing hearing about a previously undiagnosed medical condition.

Nicole Kraake, a friend of Ehmke’s mother who teaches in the Palos Verdes Unified School District in California, blamed Ehmke’s behavior at least in part on others.

“Perhaps it was the first time he felt an urge to be a part of something, as he was manipulated by the propaganda of the group mob and mentality,” Kraake wrote to Chutkan.

‘Did Not Gloat, Brag’

“He did not bring any weapons with him, had no connection to extremist groups, and never attempted to blame the media or spread disinformation online. Mr. Ehmke did not gloat, brag, or condone what others did that day.”

Ehmke has changed for the better since Jan. 6, in part due to intensive counseling, his grandparents—Bob and Judy Kuhn—wrote to Chutkan.

“We can only believe that his actions were the result of intimidation and instigation of outside people telling him ‘don’t just stand there, do something,’ ” the Kuhns wrote.

“He told us he thought he was going to die, and we only imagine the adrenaline running through his body at that time.

“We have witnessed his maturing since this incident. He is taking college classes online with very good grades and has been working at a local food bank helping others.”