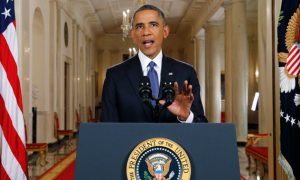 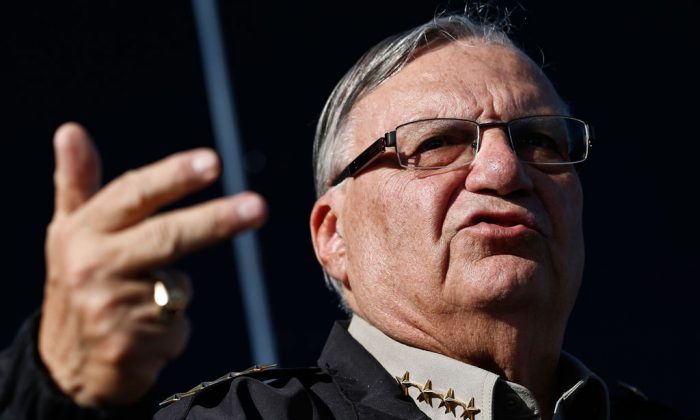 Maricopa County, Ariz., Sheriff Joe Arpaio speaks in Phoenix on Jan. 9, 2013. A gadfly attorney and a county sheriff from Arizona want to halt President Barack Obama’s immigration program in the first courtroom battle over the initiative designed to spare nearly 5 million people from deportation. On Monday, lawyer Larry Klayman will try to persuade a judge nominated by Barack Obama that the immigration system, contrary to what the president says, isn’t really broken. Klayman says the president has violated the Constitution by doing an end run around Congress and that drastic changes in immigration programs should be stopped. (AP Photo/Ross D. Franklin)
US

U.S. District Judge Beryl Howell questioned whether Maricopa County Sheriff Joe Arpaio had legal standing to challenge the immigration program announced last month. She suggested the topic is better left for Congress and the Obama administration to sort out.

In the first courtroom battle over Obama’s plan, Arpaio’s lawyer Larry Klayman said the president violated the Constitution by doing an end-run around Congress. He argued that the program would let more illegal immigrants enter the country and commit crimes, burdening law enforcement.

“It’s not policy, he’s creating law and he cannot do that under the U.S. Constitution,” Klayman said of Obama.

But Justice Department lawyer Kathleen Hartnett said Arpaio’s lawsuit seemed to be raising a “political dispute” rather than a legal claim the court could address. The Obama administration has called the case “speculative and unsubstantiated” and has urged the court to dismiss it.

Howell at times seemed exasperated with Klayman, a longtime conservative activist who has filed hundreds of lawsuits against the federal government, including challenges to Obama’s U.S. citizenship. When Klayman said his client has been threatened because of his tough views on Obama’s immigration policy, Howell responded: “That just doesn’t cut it for me.”

Howell also said it did not appear that Arpaio could show a “concrete” injury he has suffered from the new policy, especially since it will take months before the bulk of it actually goes into effect.

“If Congress doesn’t like it, doesn’t Congress have the power to step in?” she asked.

Howell said she would issue a ruling in the case soon.

Arpaio has often clashed with the federal government over the enforcement of immigration laws and he has filed suit to stop new policies announced by Obama. He claims that more than 35 percent of immigrants living in Maricopa County illegally who wound up in Arpaio’s jails in 2014 were repeat offenders, signifying in the sheriff’s view that federal officials have done a poor job of deporting criminals.

Obama’s plan marks the most sweeping change to the nation’s immigration policies in nearly three decades and set off a fierce fight with Republicans. The changes include work permits and three-year deportation stays for more than 4 million immigrants here illegally. It mostly applies to those who’ve been in the country more than five years and have children who are U.S. citizens or legal permanent residents.

Under the program, the Homeland Security Department would prioritize the removal of immigrants who present threats to national security, public safety or border security. DHS officials could deport someone if an Immigration and Customs Enforcement field office director determined that removing the person would serve an important federal interest.

The White House has insisted that Obama is acting under proper legal authority to enforce the nation’s immigration laws.

From The Associated Press. AP writers Pete Yost and Alicia A. Caldwell contributed to this report.