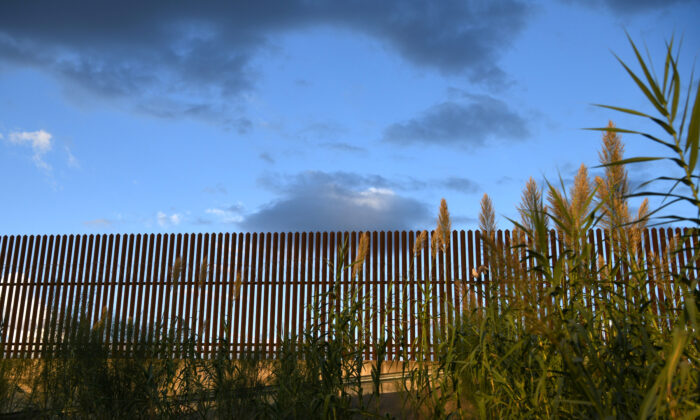 A section of border fence is pictured by the U.S.-Mexico border in the Rio Grande Valley near Hidalgo, Texas, on Oct. 7, 2019. (Loren Elliott/Reuters)
US News

A U.S. federal judge ruled that the Trump administration is operating within its authority when deciding to separate illegal immigrants who enter the country as family units at the U.S.-Mexico border.

U.S. District Judge Dana Sabraw in San Diego, California, said in a 26-page decision (pdf) on Monday that U.S. Immigration and Customs Enforcement (ICE) officials were “generally exercising their discretion to separate families at the border” consistent with immigrants’ “rights to family integrity and the court’s orders.”

The American Civil Liberties Union (ACLU) argued that border officials were separating families over minor infringements such as traffic violations or previous illegal border crossings. The organization asked the judge in July 2019 to rule on whether the government was justified in separating 911 children during the first year since June 2018.

Sabraw wrote: “Consistent with the court’s class certification orders and preliminary injunction, defendants [ICE officials] have continued to separate parents and children crossing the border when there are concerns about parentage, the parent has a criminal history or communicable disease (or long-term medical need), or the parent is unfit or presents a danger to his or her child or others.”

He added that the court has not seen any evidence to show that the government has “returned to systematically separating families at the border.”

Sabraw also denied the ACLU’s request to set new guidelines regarding separating families, and also denied the group’s request to set up an independent monitor to supervise immigration officials, writing that such a request “is an invitation that is potentially massive in scope, invades an area that is particularly within the province of the Executive Branch to secure the nation’s border, and goes beyond this court’s class certification and preliminary injunction orders.”

Sabraw asserted in his ruling that ICE officials “must conduct DNA testing before separating an adult from a child based on parentage concerns,” and that “subjective concerns about parentage—or inability to validate documentation—are an insufficient basis for separation when those concerns can be definitively addressed through use of readily accessible, inexpensive, and accurate scientific testing.”

He wrote that DNA testing is “an efficient and definitive way to resolve any concerns about fraudulent documentation.”

The ACLU said in a statement it was considering its next move in the case.

“The court strongly reaffirmed that the Trump administration bears the burden if it attempts to separate families based on an accusation that the adult is not the child’s parent,” ACLU attorney Lee Gelernt said. “We are evaluating the decision to determine next steps on how to ensure that children are not separated from their parents based on minor infractions.”

The U.S. Department of Justice did not immediately respond to a request for comment, Reuters and AP reported.

Trump signed an executive order on June 20, 2018, that he said will help stop the separation of families at the southwest border.

Just a week later, on June 26, 2018, Sabraw issued a preliminary injunction (pdf) that immigration officials were prohibited from separating parents and their children “absent a determination that the parent is unfit or presents a danger to the child,” among other requirements. Politico reported at the time that the Trump administration objected to Sabraw’s injunction, and asked Sabraw to refrain from issuing any orders while immigration agencies were working to implement Trump’s executive order.

The main action in Trump’s executive order at the time was a demand that Attorney General Jeff Sessions request the U.S. District Court for the Central District of California to modify the Flores Settlement Agreement.

The Flores settlement forced ICE officials to release families that illegally enter the United States within 20 days after a federal judge, U.S. District Judge Dolly Gee of the Central District of California, amended it in 2015 to include minors who arrive as part of a family unit. The 1997 agreement, reached during the Clinton administration, previously only applied to unaccompanied minors.

This means the children and their families then must be released into the interior of the United States, with a court date set for possibly years down the road. The Department of Homeland Security (DHS) said that the rule “creates a ‘get out of jail free’ card for illegal alien families and encourages groups of illegal aliens to pose as families hoping to take advantage of that loophole.”

Sessions announced a “zero-tolerance” policy in April 2018 ordering that all adults who cross the border illegally must be prosecuted, as per 8 U.S.C. Section 1325(a), after a jump in illegal crossings was reported by the DHS.

To comply with both the Flores agreement and the “zero-tolerance” policy, adults were separated from children with whom they had crossed the border, such that adults were detained in federal prisons while awaiting criminal proceedings, while their children, after a maximum of 20 days in detention, were transferred to Health and Human Services (HHS) and put under HHS custody as an unaccompanied minor.

Trump’s executive order meant that immigration officials can detain families together throughout their criminal proceedings for improper entry, or for any removal or other immigration proceedings. The exception would be if a child’s welfare was at risk.

The Trump administration announced in August 2019 a rule that replaces the Flores agreement and removes the 20-day time limit for holding families in detention. The rule was introduced to respond to the influx of family units entering illegally across the southern border in hopes of being released into the interior of the country rather than detained during removal proceedings. However, in September 2019, judge Gee ordered a permanent injunction (pdf) against the rule.