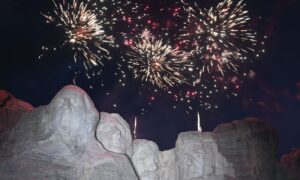 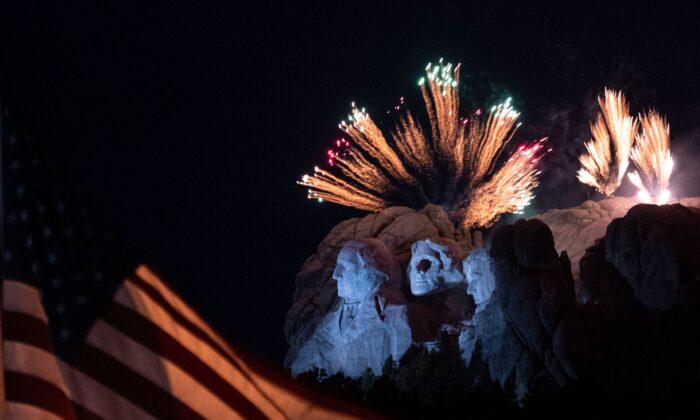 A U.S. flag flies as fireworks explode above the Mount Rushmore National Monument during an Independence Day event in Keystone, S.D., on July 3, 2020. (Andrew Caballero-Reynolds/AFP via Getty Images)
US News

A federal judge this week decided not to grant South Dakota Gov. Kristi Noem a preliminary injunction that would see fireworks allowed at Mount Rushmore for July 4.

U.S. District Judge Roberto Lange, an Obama appointee, ruled that Noem’s lawsuit is unlikely to succeed and that the Biden administration’s rejection of a requested permit was not arbitrary or capricious.

The National Parks Service denied the permit request for five reasons, including concern over the risk of a COVID-19 outbreak, concern about the potential for wildfires, and undermining relationships with Native American tribes in the area.

“The concern about COVID-19 spread, from the perspective of someone writing on March 11, 2021, was very real and based on relevant data,” Lange wrote in his 36-page decision, adding that the court cannot at this time say the service’s choice to honor tribal concerns was irrational.

Additionally, the judge sided with the defendants in the argument over whether officials changed their position from the year prior without explanation.

“The NPS’s denial of the 2021 permit after it granted the 2020 permit is not the sort of a change in policy requiring fuller explanation as to the reason for the change. But, in any event, the NPS acknowledged the 2020 event in its letter and explained some of the problems that arose from having the event and how those issues factored into its decision,” Lange said.

“Ultimately, there are strong arguments in both directions as to the balance of harms, and the public interest in the short-term appears to lie with having the fireworks display, whereas more long-term interests militate against it at least for this year,” he concluded.

The Department of Interior declined to comment. Big Fire Law and Policy Group, which represents the Cheyenne River Sioux Tribe in the lawsuit, said the ruling was not surprising.

“In light of the high burden in this case, which the state did little to meet, Governor Noem’s lawsuit does not appear to have been a serious effort to win an injunction. Instead, it looks more like a piece of political theater aimed at exciting the Trump-Noem base. We are dismayed that Governor Noem has used the federal court to jeopardize our religious freedoms and our beautiful American landscape in service of her political ambitions,” Nicole Ducheneaux, a lawyer with the group, said in an emailed statement.

Noem vowed to appeal the ruling.

“The Biden Administration canceled South Dakota’s Mount Rushmore Fireworks Celebration on completely arbitrary grounds. I am disappointed that the court gave cover to this unlawful action with today’s decision. But rest assured, this fight is not over,” she said in a statement.

“My legal team will appeal so that we can return the Fireworks Celebration to Mount Rushmore and celebrate our nation’s birthday at America’s Shrine to Democracy for next year and in the future.”

Noem sued Interior Secretary Deb Haaland and others in April after the National Park Service rejected the permit request.

In the motion for a preliminary injunction, the plaintiffs said they would lose tens of millions of dollars in direct spending and earned advertising if the fireworks event were not held this year.

The lawsuit has drawn nationwide attention. Seventeen attorneys general last month joined it to support Noem while a number of groups, including tribal groups, intervened on behalf of the defendants.