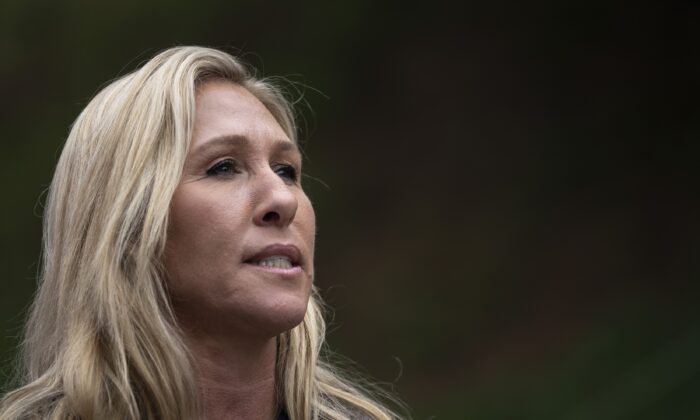 Rep. Marjorie Taylor Greene (R-Ga.) meets all the requirements for a congressional candidate and thus should be allowed to run for another term in office, a Georgia judge ruled on May 6.

The evidence is “insufficient” to establish that Greene engaged in insurrection or rebellion against the United States or supported those that did, Georgia Judge Charles Beaudrot said in a 19-page ruling.

Challengers claimed that Greene, in her first term, violated the U.S. Constitution by helping “facilitate” the Jan. 6, 2021, breach of the U.S. Capitol, which they described as an insurrection.

The challenge was allowed to proceed by U.S. District Judge Amy Totenberg, an Obama appointee, and Greene testified under oath during a hearing in Atlanta on April 22, saying she did not know beforehand of the plans to breach the Capitol nor was she involved in the execution of the breach.

Greene “should not be required to ‘prove a negative’ and affirmatively establish she did not engage in an insurrection,” Beaudrot said. Challengers thus had to prove Greene violated the Constitution, and they did not so do, he ruled.

“In short, even assuming, arguendo, that the [breach] was an insurrection, challengers presented no persuasive evidence Rep. Greene took any action—direct physical efforts, contribution of personal services or capital, issuance of directives or marching orders, transmissions of intelligence, or even statements of encouragement—in furtherance thereof on or after January 3, 2021,” the judge wrote. Furthermore, there is no evidence Greene, who was inside the building and unaware of the breach until the session of Congress was suspended, participated in the breach herself, he added.

“Challengers make a valiant effort to support inferences that Rep. Greene was an insurrectionist, but the evidence is lacking, and the court is not persuaded,” the ruling stated.

Greene told The Epoch Times in an email that “Democrats have seen how hard I fight for America First values with Republicans in the minority, so they are absolutely terrified to see me with the power of the majority,” and that the challenge, which she described as “an unprecedented attack on free speech,” failed.

“I applaud Judge Charles Beaudrot on his correct ruling and look forward to winning big on May 24th,” she said.

Free Speech for People, the group behind the challenge, said in a statement that the ruling “betrays the fundamental purpose of the Fourteenth Amendment’s Insurrectionist Disqualification Clause and gives a pass to political violence as a tool for disrupting and overturning free and fair elections.”

The group urged Georgia Secretary of State Brad Raffensperger, a Republican, to “take a fresh look at the evidence presented in the case and reject the judge’s recommendation.”

Raffensperger will, after receiving Beaudrot’s ruling, decide whether Greene is eligible for the May 24 primary.

Greene represents Georgia’s 14th congressional district. She won election in 2020 with 75 percent of the vote after emerging from the Republican primary and a subsequent primary runoff.