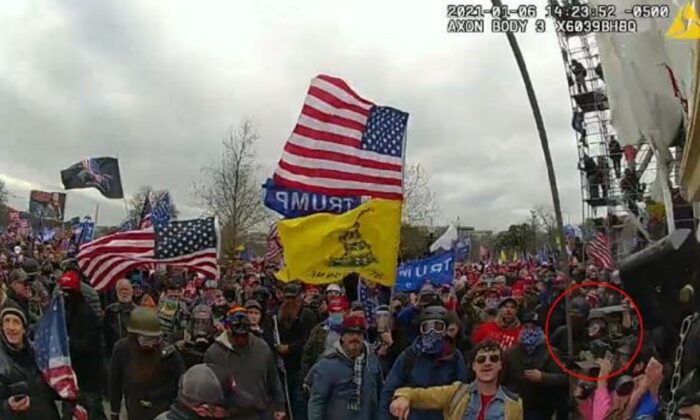 A federal judge on March 17 allowed a Jan. 6 defendant to plead guilty to a single charge after initially resisting the move during a recent hearing.

U.S. District Judge Randy Moss, an Obama appointee, repeatedly asked Lucas Denney, if he was aware of his rights and if he wanted to proceed with pleading guilty to assaulting an officer at the U.S. Capitol in Washington on Jan. 6, 2021.

Prosecutors violated the law by waiting months to file charges against Denney and only recently filed a one-count indictment despite initially having the Texas man arrested on additional charges.

One of Denney’s lawyers, William Shipley, moved at a hearing Monday for a guilty plea in part because he believes doing so would preclude the filing of more charges but Moss rejected him, surprised by the effort.

During Thursday’s hearing, the judge was particularly focused on telling Denney that pleading guilty to one charge didn’t mean he wouldn’t face more charges in the future.

“I just want to make sure you understand that it’s possible that the government is going to bring other charges against you,” Moss said, noting that there was no plea bargain in place.

Denney said he did not, and consulted with his lawyers for about 20 minutes before returning and saying he wanted to plead guilty.

“I talked to Mr. Denney about some of these issues,” Shipley said after the break. He noted that appeals courts have split on whether double jeopardy would block any future charges concerning Denney’s conduct on Jan. 6.

Prosecutors said they have not made a decision on pursuing additional charges.

Moss eventually relented and accepted Denney’s plea after the defendant said he was satisfied with his lawyers and Moss determined there was a factual basis for the plea.

Denney admitted to picking up a pole from the ground and swinging that item at a law enforcement officer.

“The purpose was to block the pepper spray, but I did,” Denney said.

According to charging documents, at approximately 1:37 p.m. on Jan. 6 Denney approached a line of officers and shouted at them before grabbing at metal barricades the officers were standing behind. After appearing to be sprayed by a chemical spray, Denney retreated but came back about two minutes later.

Shortly thereafter, Denney shoved an officer, attempted to grab a canister of spray from another officer, and picked up “a long metal pole” from the ground and swung it at the latter officer. Denney was also captured on surveillance footage launching a tube towards a line of officers and joining a crowd pushing against officers at a passageway into the Capitol.

After Jan. 6, Denney was said to have posted on Facebook bragging about his actions, including saying: “it wasn’t easy at all. I had to fight several cops.and didn’t make it on my 1 st attempt. I charged the cops and got in a fight with a lot of them. I got beat tup [sic] and beat with they’re clubs and maced. But the 2nd time I won!!”

He also wrote, according to a criminal complaint, that “we made history today” and “what we did today was totally epic!!!”

Denney later told the FBI that he was a member of the group Patriot Boys of North Texas, which he described as a conservative group that supported President Donald Trump. Denney was accused of lying about not knowing anybody who went to Washington to enter the Capitol and claiming he no longer had a Facebook account.

If prosecutors had filed all the charges listed in the complaint, Denney would have faced some two dozen charges.

Following his guilty plea, Denney faces up to 20 years in federal prison.

Because of mitigating factors such as a lack of criminal history, Shipley told the court his client will likely be in the range of 41 to 51 months in jail. Prosecutors’ estimate was 57 to 71 months. Judges can go outside the guidelines but often stay within them when sentencing people who have pleaded guilty.