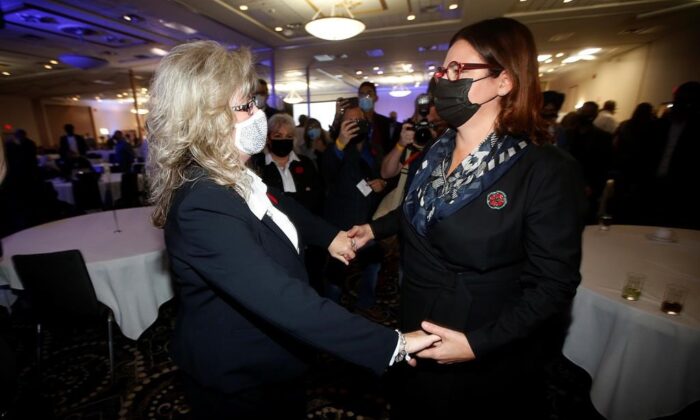 WINNIPEG—A judge has rejected a court challenge of the vote that made Heather Stefanson leader of Manitoba’s Progressive Conservatives and the province’s premier.

Shelly Glover, who came up just short with 49 percent of the ballots on Oct. 30, alleged there were voting problems and wanted the court to toss out the results.

“I am not satisfied that any of the alleged irregularities … affected the election result,” Court of Queen’s Bench Justice James Edmond said Friday.

Lawyers for the party had told court that Glover had no evidence anything happened to affect the voting results.

They also said scrutineers from both the Glover and Stefanson campaigns oversaw all ballots as they were counted.

Three days after the vote, Stefanson was sworn in as premier to replace Brian Pallister, who had retired. Glover refused to concede and launched her court challenge soon after.

Glover’s lawyer, Dave Hill, pointed to daily spreadsheets the party gave to both campaigns as mail-in ballots were coming through in the latter part of October. The sheets were meant to keep track of which party members had voted.

The last spreadsheet, after the voting deadline passed, had about 500 fewer votes than the official results announced some 16 hours later.

Hill also said there was questionable conduct around keeping the ballots secure from interference. Boxes were moved out of the counting room after the count, he said.

Harley Schachter, lawyer for the PC party, argued that the daily spreadsheets were never an official count and were known by both campaigns to be flawed.

He also said the spreadsheets had no bearing on the number of votes received and counted. Scrutineers from both campaigns oversaw all ballots, both while they were deemed valid after arriving in the mail and again as they were counted on Oct. 30, he added.

The ballots were counted at 18 tables, in the presence of Glover and Stefanson scrutineers, and a tally sheet at each table recorded the number of votes for each candidate.

Lawyers for the PC Party and Stefanson said Glover’s team produced no evidence that any ballots were not counted properly.

As for the ballot boxes being moved, Schacter said they were under the control of an outside accounting firm and security company.