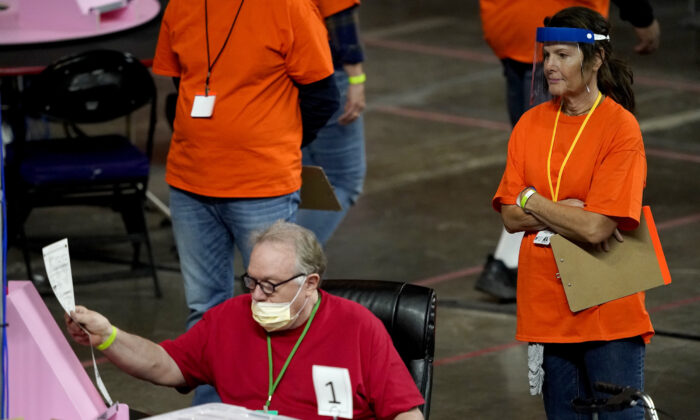 A judge on Thursday rejected the Arizona Senate’s motion to dismiss a public records lawsuit relating to its independent full audit of ballots cast in Maricopa County in the 2020 election.

The lawsuit was filed by watchdog group American Oversight and sought records of communications between Senate officials and external vendors working on the audit, including Florida-based cybersecurity firm Cyber Ninjas, a private company hired by the Arizona Senate to oversee the audit of Arizona’s most populous county. It also sought documents related to the cost of the audit, donor information, and its operations.

“It is difficult to conceive of a case with a more compelling public interest demanding public disclosure and public scrutiny,” Judge Michael Kemp of the Arizona Superior Court in Maricopa County wrote in a seven-page ruling (pdf).

Kemp said that he “completely rejects” the arguments presented by the defendants’ lawyers.

“Nothing in the statute absolves Senate defendants’ responsibilities to keep and maintain records for authorities supported by public monies by merely retaining a third-party contractor who in turns hires subvendors,” Kemp wrote.

Keeping the election audit records private “would be an absurd result and undermine Arizona’s strong public policy in favor of permitting access to records reflecting governmental activity,” the judge said in his decision.

Kemp said records on who is funding the audit should be released to the public, saying that the $150,000 the Arizona Senate is paying Cyber Ninjas “appears to be far short of paying the full cost.’’

“The public does not know who is financing the remaining costs,’’ he wrote.

Kemp said information related to the audit information is covered under the state’s public records law because Arizona Senate President Karen Fann has said that the audit is a public function.

Fann previously stated that the remaining costs of the audit are covered by donors and contributions.

“Starting now, the Arizona Senate is going to have to face real, public accountability,” Austin Evers, American Oversight’s executive director said in a statement. “For months, the public has been asked to trust the word of senators about the sham audit of the 2020 election. Arizona law does not allow the Senate to outsource democracy and shroud it in secrecy. This ruling makes clear that the Senate must immediately begin releasing records to the public.”

Meanwhile, Democrats on the House Oversight and Reform Committee on Wednesday launched a probe into Cyber Ninjas.

In a letter to (pdf) to Cyber Ninja’s CEO Douglas Logan, House Oversight Chairwoman Carolyn Maloney (D-N.Y.) and Rep. Jamie Raskin, (D-Md.) said they are probing whether the company is working to “reverse the result of a free and fair election for partisan gain.”

The pair asked for documents related to the audit, including information about how it is being funded. They are also asking for any and all communications between the cybersecurity firm and former President Donald Trump or his allies.