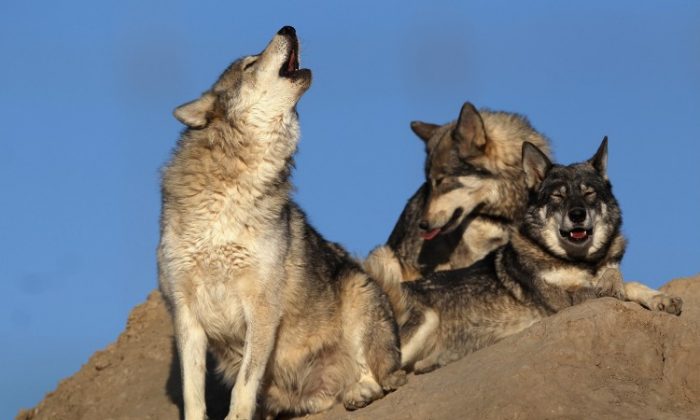 A rescued wolf howls in this photo taken at The Wild Animal Sanctuary in Keenesburg, Colo., in 2011. (John Moore/Getty Images)
Environment

A federal judge in California has revoked changes to the Endangered Species Act that were made under the Trump administration, giving a win to environmental groups that filed a lawsuit over the move.

Due to the changes brought by the Trump administration in 2019, the U.S. Fish and Wildlife Service was no longer able to provide the same protections for a species considered to be “threatened” as they did for a species that was “endangered,” critics said.

The new rules also stipulated that economic considerations needed to be taken into account when deciding whether a species would be listed as endangered or threatened.

A lawsuit filed in 2019 against the Trump administration by environmental groups including EarthJustice, Natural Resources Defense Council, and the Sierra Club argued that the government’s policies threatened to upend protections for hundreds of species.

In response to the lawsuit, Interior Secretary Deb Haaland and Commerce Secretary Gina Raimondo, along with the U.S. Fish and Wildlife Service and National Marine Fisheries Service, filed a motion to remand the Trump-era rules voluntarily in 2021.

The agencies asked the court to allow them to partially rewrite regulations of the Endangered Species Act. They planned on conducting a review of the changes before acting on the issue, CNBC reported.

On July 5, U.S. District Judge Jon S. Tigar decided to end the Trump-era changes, arguing that there was no reason to keep them as they were going to be changed anyway by the government agencies.

“Regardless of whether this Court vacates the 2019 ESA Rules, they will not remain in effect in their current form,” Tigar said in the ruling (pdf).

Bart Melton, Wildlife Program Director for the National Parks Conservation Association, called the court decision a “win for America’s most at-risk wildlife,” according to a July 5 press release by EarthJustice.

“We are grateful for the court’s restoration of protections that were removed by the previous administration.”

Back in 2019 when the Trump administration rolled out the changes, Interior Secretary David Bernhardt and other administration officials argued that the new rules improved efficiency of oversight while ensuring the protection of rare species.

The best way to uphold the Endangered Species Act is to ensure that it achieves its ultimate goal of “recovery of our rarest species,” Bernhardt said, according to Breitbart.

Gary Frazer, an assistant director at the U.S. Fish and Wildlife Service, said the government would disclose the economic costs of protecting a struggling species under the new guidelines, Breitbart reported.

“Nothing in here in my view is a radical change for how we have been consulting and listing species for the last decade or so,” Frazer had said to reporters. Instead, the changes bring “more transparency and certainty to the public about the way we’ll carry out our job.”