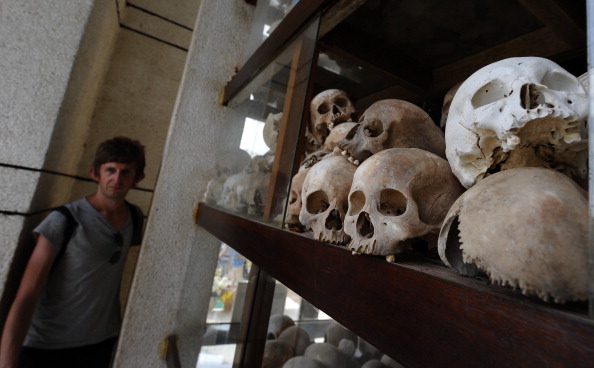 A foreign tourist walks past skulls of Khmer Rouge's victims displayed in a stupa at the site of the former killing field at Choeung Ek in the outskirts of Phnom Penh on February 2, 2012. (Hoang Dinh Nam/AFP/Getty Images)
World

The second Western judge in half a year has resigned from the United Nations-backed tribunal tasked with investigating and prosecuting former Khmer Rouge leaders in Cambodia.

Swiss national Laurent Kasper-Ansermet said that his investigations into the crimes committed by Cambodia’s former communist regime were constantly blocked by his Cambodian counterpart, Judge You Bunleng.

“Judge You Bunleng’s active opposition to investigations into [the] cases … has led to a dysfunctional situation” within the tribunal, the Extraordinary Chambers in the Courts of Cambodia (ECCC) said in a statement on Monday.

Since the day Kasper-Ansermet, the alternate judge at the time, was named to replace Blunt—in accordance with the rules of the ECCC— he has faced a climate of non-cooperation.

Kasper-Ansermet was tasked with pushing forward investigations into cases 003 and 004, which the Cambodian government has been aggressive in trying to kill.

“If they want to go into Case 003 and 004, they should just pack their bags and leave,” said Cambodia’s information minister last May, The Epoch Times reported at the time.

In the ECCC statement on Monday, it said that Kasper-Ansermet recently had an informal meeting with Judge Bunleng, during which the Cambodian judge refused to discuss the cases. Bunleng instead issued his Swiss counterpart a written order demanding that he immediately cease his “unlawful activity.”

Although those named in cases 003 and 004 have never been made public, it is widely believed that they hold positions in the current administration.

The Cambodian government has argued that the cases should be closed since taking them to trial will only bring social disruption.

Kasper-Ansermet’s resignation will go into effect May 4. Before that time, he plans to carry on with the work he has been doing. Recently, he notified the suspects in the two cases of their rights, and he plans to conduct interviews with civil parties starting this week.

The U.N. has been under intense pressure of the human rights community and genocide survivors to ensure the ECCC makes convictions. The Khmer Rouge’s “year zero” reign of terror under Pol Pot between 1975 and 1979 killed roughly 2 million people out of a population of 5 million by execution, torture, starvation, or overwork.

To date, the tribunal has only handed down one conviction, to Kaing Guek Eav, known as “Duch,” who was sentenced to life in prison for overseeing the torture of over 15,000 people.