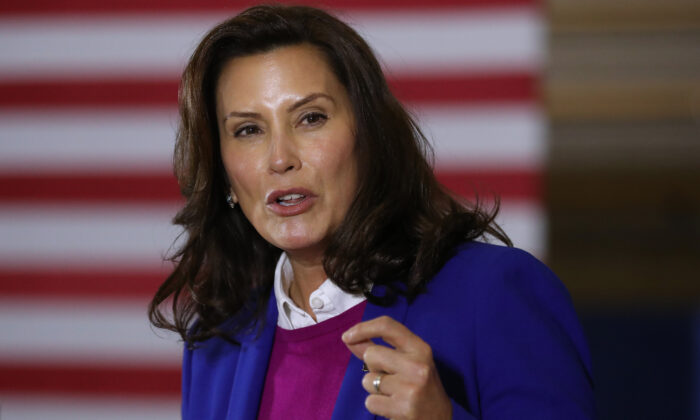 A trial court judge has quashed a subpoena issued on Aug. 8 that would have required Michigan Governor Gretchen Whitmer to testify in a lawsuit she brought to block county prosecutors from enforcing the state’s strict abortion law.

Whitmer, a first-term Democrat seeking reelection in November, filed a motion to quash the subpoena on Aug. 9, claiming that she was too busy to appear at an evidentiary hearing on her case scheduled for Aug. 17.

She suggested that the defendants in the case bring in other executive branch officials to testify instead and contended that her personal appearance at the hearing would pose security risks to herself and the court.

In an order issued on Aug. 10, Oakland County Circuit Judge James Cunningham agreed with Whitmer’s arguments and quashed the subpoena, writing in part, “The Court finds good cause, for reasons stated in the motion, to grant the motion. As such, Plaintiff Gretchen Whitmer is excused from compliance with the subpoena filed on August 8, 2022.”

He is asking the Court of Appeals to force Whitmer to appear and testify.

The appeal states in part, “The Circuit Court issued the order without allowing Appellants to respond in any manner and did not hold hearings on this issue.”

Kallman told The Epoch Times that this is not the first time the court left his clients out of the process.

“Whitmer filed for a temporary restraining order (TRO) in the Oakland Circuit Court at around 4 p.m. on Aug. 1, to restrain the defendants from enforcing MCL 750.14. The court granted the TRO and issued an order approximately one hour later without hearing from any other party in the case.”

The appeal rests largely on the principle of American jurisprudence that a defendant can confront his accuser and contest the claims made against him.

Kallman stated, “It goes against all principles of fairness and justice to permit anyone, let alone a government official, to bring a lawsuit, make serious claims against defendants, and then assert she is too busy to come to court to defend her claims.

“My clients did not bring this suit, Governor Whitmer did. She brought this on herself.

“It is the height of hypocrisy to bring a lawsuit, seek immediate relief, and then claim she is too busy to participate in her own suit when challenged.”

The emergency leave to appeal filed by the defendants states in part, “Plaintiff claims it is unusual to subpoena a ‘high-ranking’ government official.”

“It is also unusual for a governor to sue a county prosecutor to cease enforcement of duly-enacted state laws with which the governor personally disagrees,” said Kallman.

Kallman told The Epoch Times that Whitmer had no qualms about dragging the county prosecutors into court.

“My clients are high-ranking elected officials in their jurisdictions. It flies in the face of fairness and due process for the governor to be permitted to force them to go to court, while she contends the same standard does not apply to her.”

The legal battle with Jarzynka and Becker began on April 7, 2022, when Whitmer, in anticipation of the June 24 overturning of Roe v. Wade by the U.S. Supreme Court, filed a lawsuit to keep state and county officials from enforcing the strict abortion statute that would be triggered into effect by the High Court’s decision.

Whitmer simultaneously pressured the Michigan Supreme Court to expeditiously rule that abortion is a right protected by the state constitution.

On May 17, the Michigan Court of Claims issued a temporary injunction preventing state officials and county prosecutors from enforcing what Whitmer calls “the extreme 1931 abortion ban.”

The 1931 statute (MCL 750.14) makes it a felony for a doctor to perform an abortion for any reason other than to save the life of the mother.

In an Aug. 10 press release, Whitmer said of the Court of Claims order, “The court ruled that the 1931 law likely violated the Michigan Constitution’s Due Process Clause and would result in ‘irreparable harm’ if enforced.”

On Aug. 1, the Michigan Court of Appeals issued an order that the May 17 injunction from the Court of Claims applies to state officials only and does not extend to county prosecutors.

On the same day as the Court of Appeals ruling, Whitmer went to Oakland County Circuit Court and won a temporary restraining order that prevented county prosecutors from enforcing what she called the state’s “draconian” abortion law.

Commenting on the disarray and confusion of Michigan’s judicial system, Whitmer said in an Aug. 10 statement, “The back and forth of these lower-court rulings just over the course of a single day confirmed that the Michigan Supreme Court must act…to determine the constitutionality of abortion in Michigan.”

Whitmer stated that she will continue to “fight like hell” to “protect Michiganders from suffering irreparable harm to their rights and their health.”

To that, Kallman responded, “I wonder if Governor Whitmer has considered the irreparable harm done to the aborted babies.”