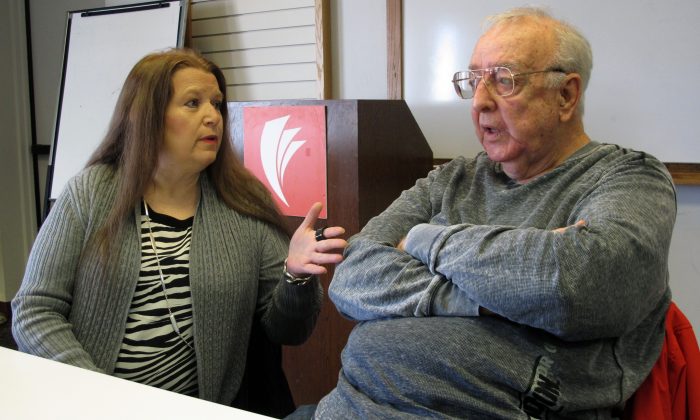 Lori Cooper (L) discusses her efforts to bring to trial the suspect who shot her father, Columbus police officer Niki Cooper, in 1972, as Niki Cooper and partner Bob Stout (R) interrupted a burglary, in Columbus, Ohio on Jan. 30, 2017. (AP Photo/Andrew Welsh-Huggins)
US

COLUMBUS, Ohio—Prosecutors failed for 45 years to try the suspect in a 1972 shooting of an Ohio police officer, but that’s not reason enough to drop the case now, a prosecutor argued Tuesday.

At issue is the March 1972 shooting of Columbus police officer Niki Cooper as he and a partner interrupted a burglary. Cooper was hit in the left arm and never regained full use of the injured limb. He died just over three years ago at age 71.

Hays, shot three times by Cooper, was left a paraplegic. He was indicted but never prosecuted following the shooting as he fell through the cracks.

Two of Hays’ accomplices were charged and pleaded guilty.

Cooper’s daughter, Lori Cooper, dug into court records after her father’s death and discovered that Hays, now 82, was alive and living in Dayton. She brought the records to authorities, who agreed reopen the case.

Reece asked attorneys on both sides to defend their position, but he seemed skeptical of O’Brien’s arguments for trying Hays after all this time, noting at one point that the Kentucky governor agreed to extradite him back to Ohio.

“If he was released by the governor of Kentucky to Ohio, all Ohio had to do was to go get him and bring him back,” Reece said.

Later, he asked: “Where does common sense come into this case?”

A decision by the judge was expected in a week or so.

Prosecutors knew of Hays’ whereabouts at least six times over the years, including his initial hospitalization in Columbus, his transferal to a veteran’s hospital in Cleveland, and stints in a Kentucky jail and a Connecticut prison, his attorney, Robert Essex, told the judge.

Hays also received a new Ohio driver’s license in 2006 and has renewed it twice, Essex said.

“I don’t know what a person is supposed to think about how strong the state’s desire is to proceed on a case when at every turn he gets released,” Essex said.

He also questioned whether Hays could withstand a trial, saying the defendant has lost one leg, may lose another and would have to attend on a stretcher.

Lori Cooper said afterward the family was disappointed the judge didn’t rule on the spot but remain confident the case will be reopened.

“We’ve always been looking for justice,” she said.