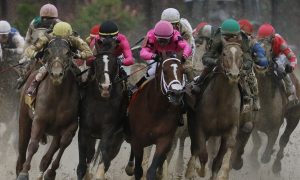 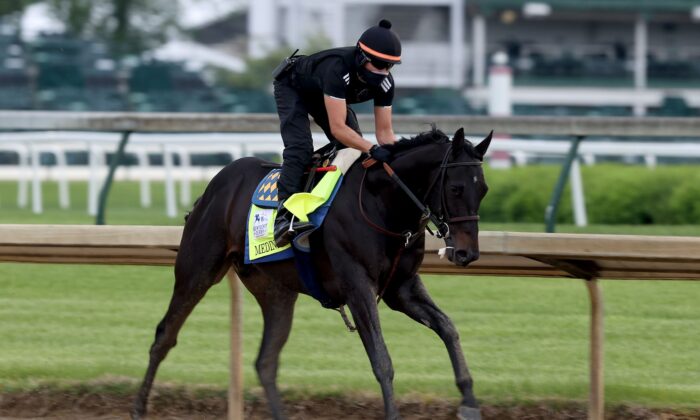 Medina Spirit runs on the track during the training for the Kentucky Derby at Churchill Downs in Louisville, Ky., on April 29, 2021. (Andy Lyons/Getty Images)
US

By Janet Patton
From Lexington Herald-Leader

LEXINGTON, Ky.—A Kentucky judge on Wednesday ordered Medina Spirit’s frozen urine sample to be flown to a New York lab in a private plane for more testing to help determine the fate of the Kentucky Derby winner.

Baffert and Zedan have to pay for the flight.

The order came after a hearing June 11 over exactly how much of the remaining urine sample the Kentucky racing commission would give attorneys for Baffert and Zedan, who hope to prove that Medina Spirit was not injected with a corticosteroid before the Derby.

The two were not able to agree on a quantity and took the matter to court.

Once the sample arrives at the New York lab, “under watch of the representatives,” the urine sample will be thawed and divided: Baffert and Zedan’s team gets 20 milliliters to test for three substances found in Otomax, the ointment that Baffert says was used on Medina Spirit.

The rest, 5 milliliters or so, will stay in the hands of the Kentucky racing authorities, as will the original urine sample sent to the New York lab, now potentially contaminated by Medina Spirit’s blood.

Court filings indicated that Baffert’s attorney wanted to be allowed to run more tests than the three ordered, but the judge did not agree.

Wingate ordered the lab to give any remaining urine or blood back to the racing authorities in case more testing is needed.

He also ordered the New York lab to deliver its results simultaneously to the racing commission and to Baffert and Zedan.

The order set no timetable for when the additional testing must take place.

“The court believes that this is a fair and equitable distribution that will hopefully expedite this significant matter that not only has the Commonwealth, but also the entire horse racing industry, waiting with bated breath,” Wingate said in the order. “The results of the blood sample have cast the Commonwealth’s signature industry into the forefront of national news causing rampant speculation about what the outcome may be. This matter is of extraordinary importance to the Commonwealth and the horse racing industry and deserves swift attention and incontrovertible results.”

Wingate was careful to say that the racing commission and its Colorado testing lab, which found betamethasone in Medina Spirit’s blood, had properly shipped the original samples to New York.

Medina Spirit won the Kentucky Derby on May 1 but could be disqualified after the medication, which is not allowed in racing horses, was detected.

Owner Zedan, who has not received the $1.68 million purse from Churchill Downs, and trainer Baffert are hoping to persuade authorities that the ointment constitutes mitigating circumstances.

It is unclear that the method of administration will matter. The Kentucky racing commission has yet to issue any action in the case. But Churchill Downs has barred Baffert and his employees from its tracks for two years.

In his order, Wingate said the court was taking no position on that. “The ‘hot button’ issues such as decisions concerning any penalty, disqualification or use of an ointment versus an injection are not part of this narrowly tailored litigation,” he said.